If you’re anything like me, you find VocalSynth 2 deceptively intimidating: the GUI looks perfectly easy to grasp, but once you get going, you find the results unpredictable, unless you really take the time to dive in.

So recently I took that time and dove in—and I came back with tips. Below are three ways to warp your vocals with VocalSynth 2, complete with screenshots and examples. All the examples will be taken from a raw vocal recording I did quite a few years ago, a recording in which I blatantly aped Maynard James Keenan (ah, the benefits of hindsight…). We’ll be using this as our “tool” for learning:

For our first approach, we’re going to turn to Compuvox. What is Compuvox? Here’s what the User Guide says:

“Compuvox is based on a technology known as Linear Predictive Coding (LPC) which has existed since the late 1960s. As with a number of the audio processors in VocalSynth, LPC was originally a communications technology for encoding intelligible speech at low bit rates to save bandwidth. Nowadays this computerized vocal sound is often used as a special effect common in electronic music production. The outcome sounds similar to infamous toys like the Furby, Speak n Spell (which uses LPC), and even older text-to-speech technologies.”

The guide goes on to talk about how Compuvox “breaks down the vocal signal into two components”—the formants to synthesize vowel sounds and the like, and the “excitation,” which the guide defines as “the buzz or noise created by the vocal folds.”

In laypeople terms, it’s all about turning the vocals here into cool sounds with sputtering artifacts—and that’s what we’re going to do.

VocalSynth 2 includes individual Compuvox presets to help you get started. As you can see, I started with the Basic Syntax preset and edited from there: I’ve low-passed the vocal to a great degree using the module’s filter. I’ve done this to make the words less intelligible, which I actually want for this approach. I’ve also chosen one square wave oscillator pitched down two octaves, and blended it with a triangle waveform oscillator.

Next, let’s look at the stomp-box style effects below: more low-pass filtering, some distortion, the Transform effect for convolution processing (i.e. “reamping”), a little chorusing, and finally, some ring modulation for a gritty “rub.”

I’ve also gotten us some stereo width, as you can see in the bottom-right of this screenshot: 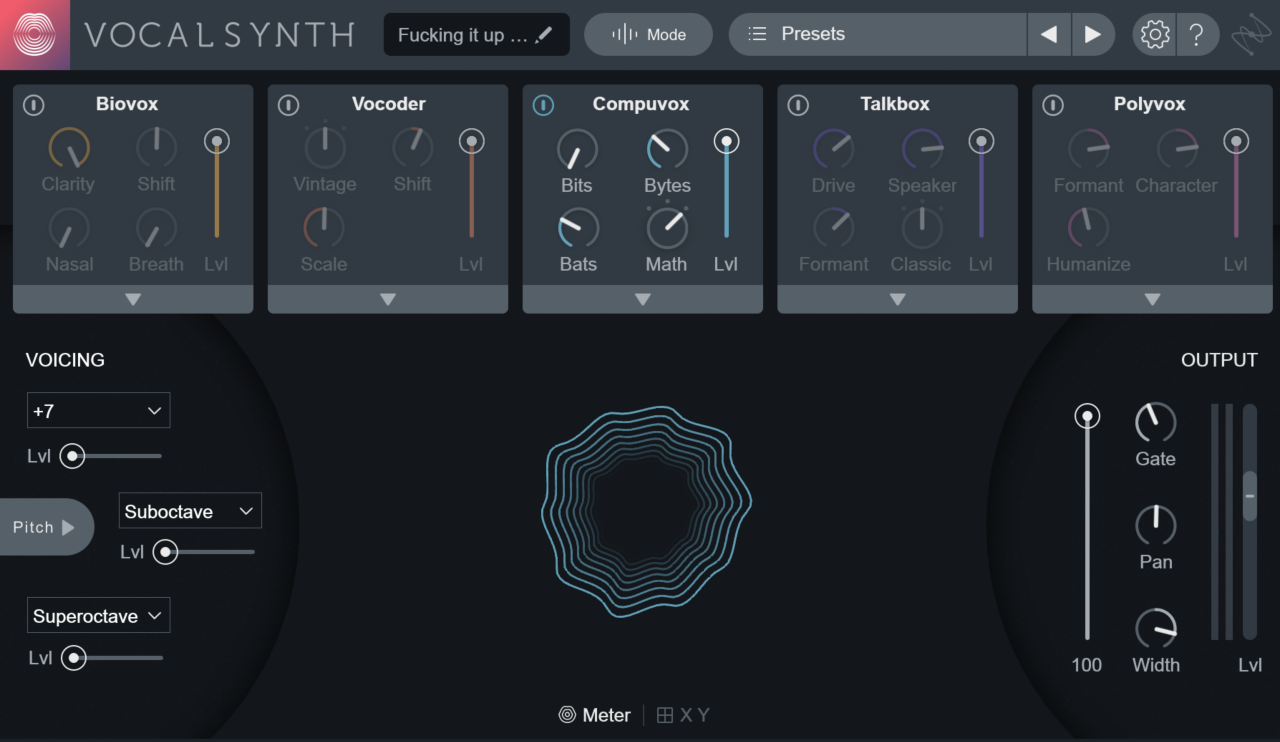 And this is a pretty good start. It could work in an EDM track. Of course, we’d want to mix it further, and to do that, let’s use some other iZotope tools (call it extra credit).

I’m going to add some low-end bump and high-end fizz in Neutron, along with some transient shaping. I’m also going to cut out the subsonic lows on the sides using Ozone, and as a final touch, I’ll add a little harmonic excitement and tube-limiting. The results?

This approach could anchor a song very nicely. I’ll keep it in my back pocket the next time I want to turn vocals into bass synths.

Sometimes you want to use an effect to create harmonies that don’t resemble anything else in modern production. Sure, we can turn to a lot of different tools—we can Melodyne harmony parts, play them with the the MIDI tools in VocalSynth 2 (covered later), or use Nectar 3 Plus’s Harmony module to pitch vocals up and down. But the ear has been exposed to these effects many times over.

This isn’t the case with Biovox—the newest kid on VocalSynth’s block. This module models physiological aspects of the voice, and allows you to synthesize them into esoteric sounds.

We’ll take our buddy sample again, but this time we’ll have some fun with the pitch. We’ll take this... 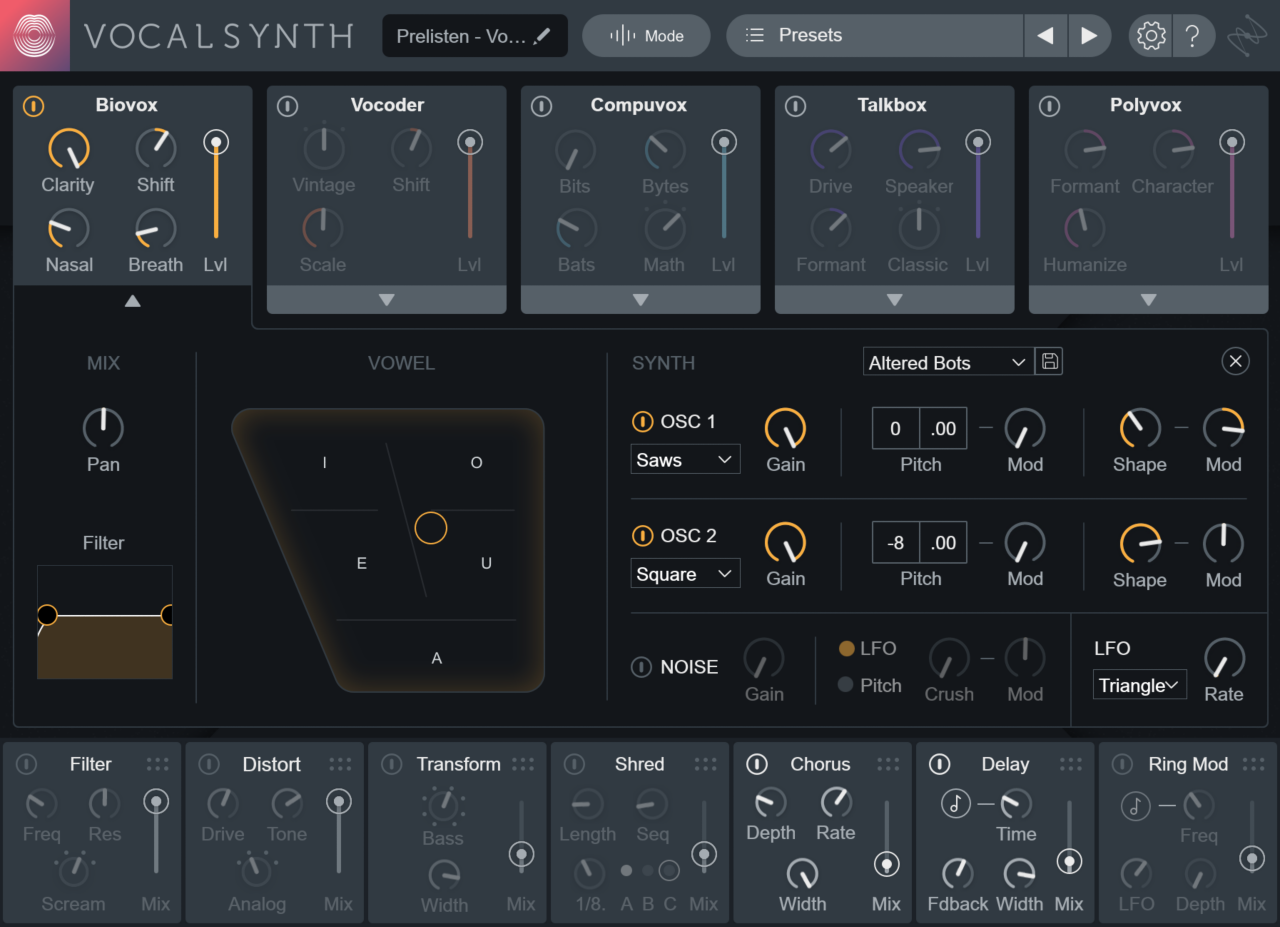 One oscillator is pitched down -8 cents, as you can see. But there’s more pitch work going on: 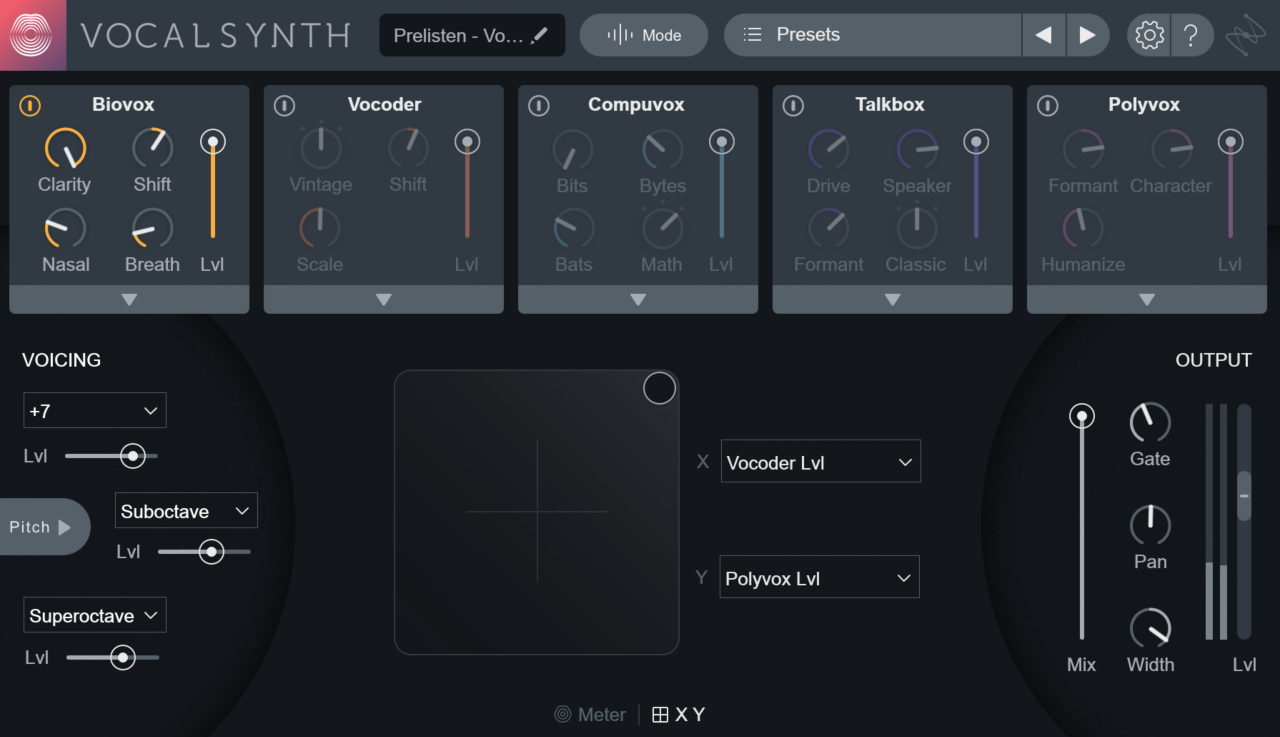 We’re adding an octave below, an octave above, and a fifth above (+7). Also, we’ve cranked the width. Finally, we’ll add some chorusing, and some delay for more space and ambiance:

Adding some subtle chorus and delay

We can also go further—we can automate the Vowels panel. Biovox, as you see below, offers a Vowels panel that is an X/Y pad of sorts. The further you move the node on this pad away from the center and towards each of these vowel sounds, the more VocalSynth will force audio to sound like said vowel sound. 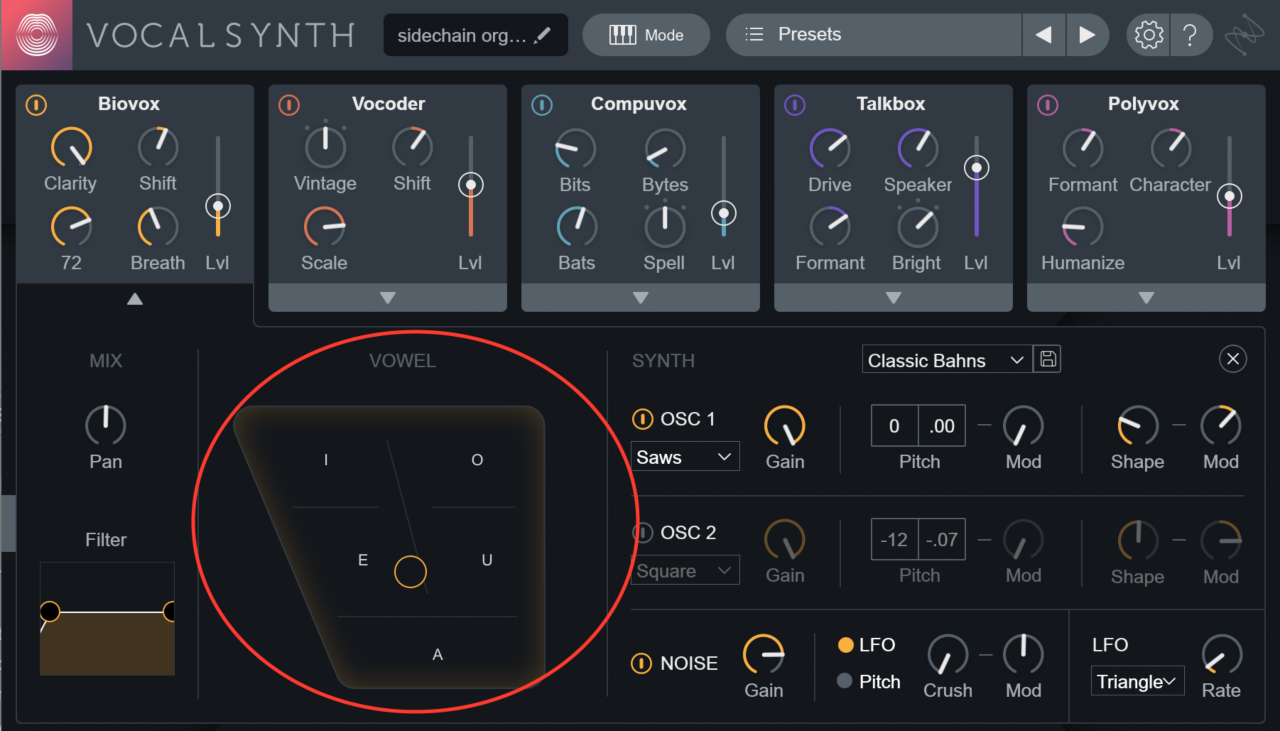 When we automate a change in the Vowel panel, we can elicit an even more interesting effect:

3. Operate VocalSynth 2 as a virtual instrument and set instruments as a sidechain

For our last trick, we’ll show you how to use VocalSynth 2 as a softsynth. Actually, the plug-in itself will show you how to activate MIDI mode. Click on the prominent “Mode” button (located at the top of the GUI), select MIDI on the left side, and the plug-in will walk you through the process in a step-by-step guide tailored for your specific DAW.

As you can see, I’m using Logic Pro X, so the tutorial it gives me is for Logic: 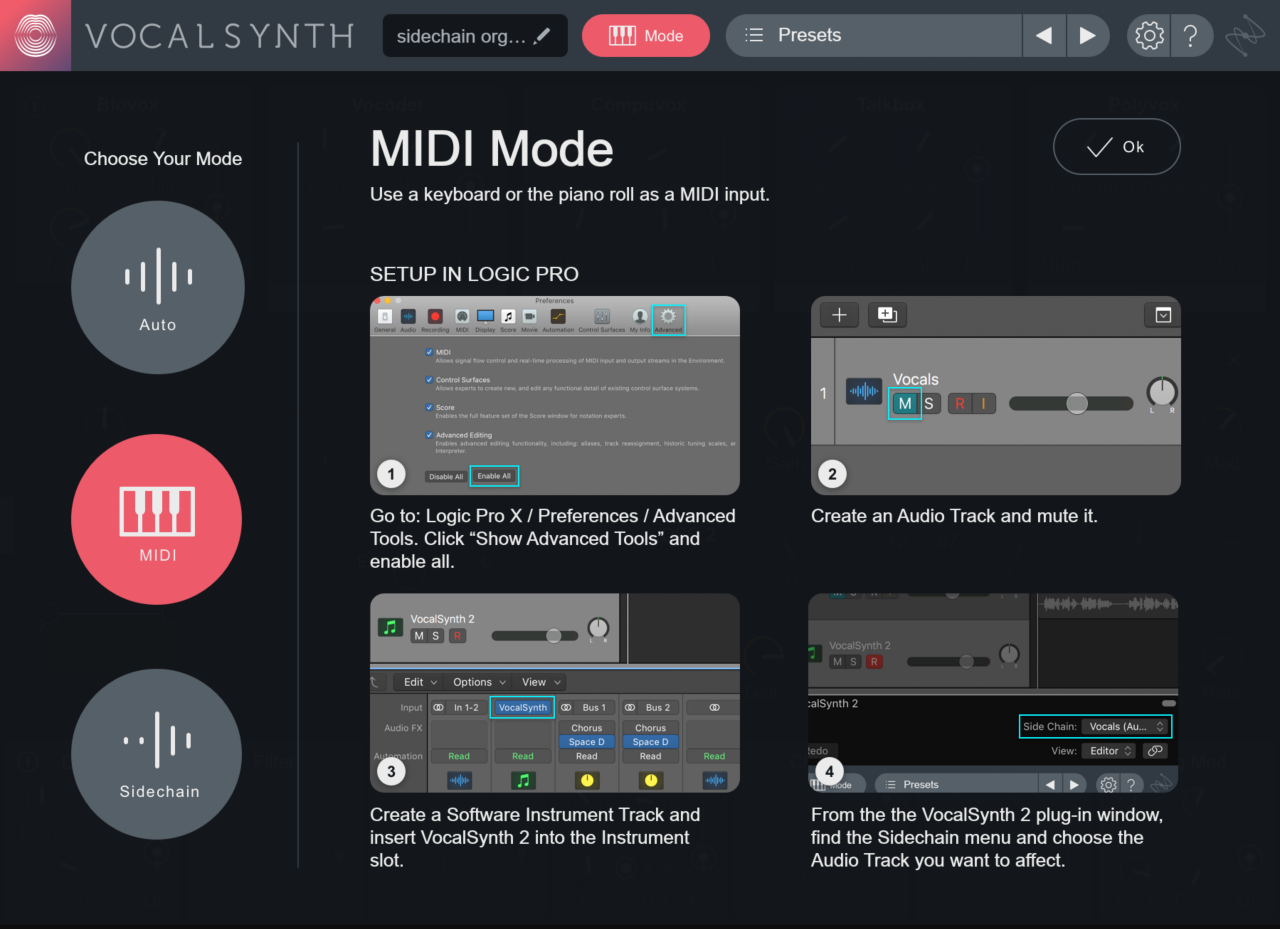 Once I set it up, I can route my audio into the sidechain, fiddle with my modules, and use my keyboard to compose regions that will ultimately “talk.” 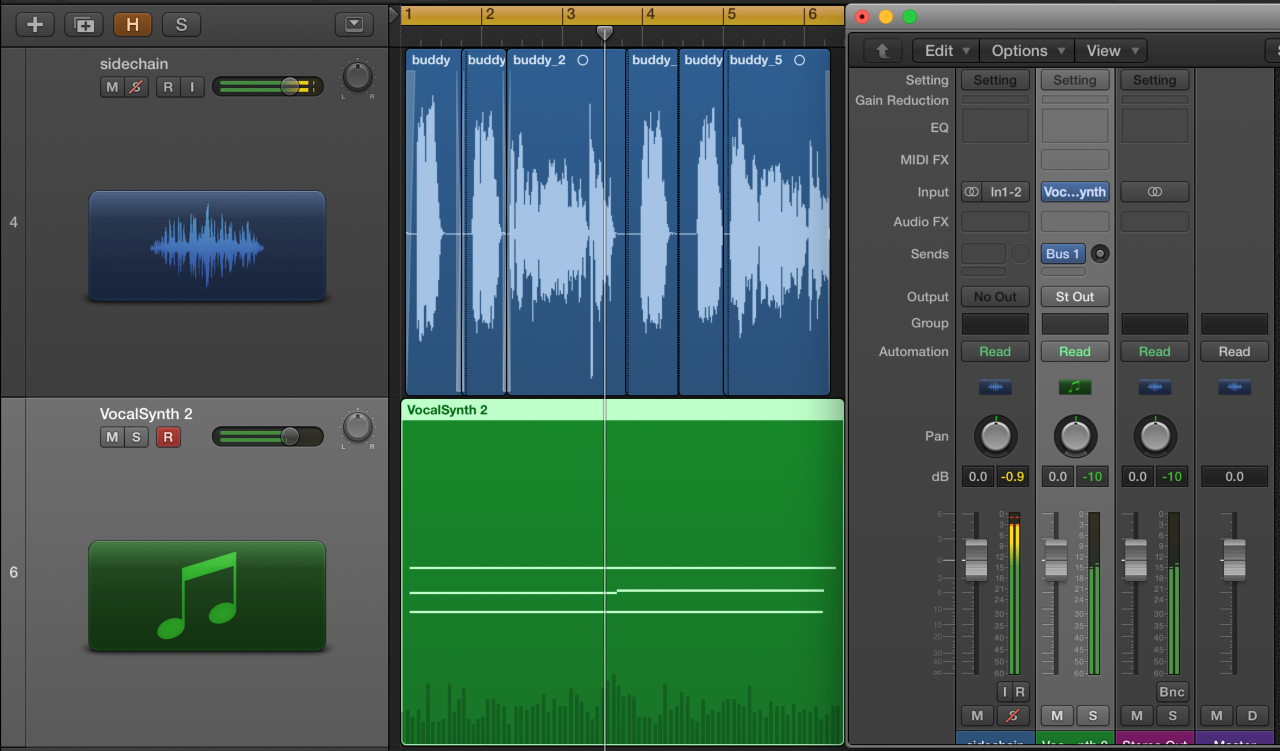 MIDI and sidechain in project

I simply play some chord shapes, and then choose my modules. I can go for a traditional vocoder sound: 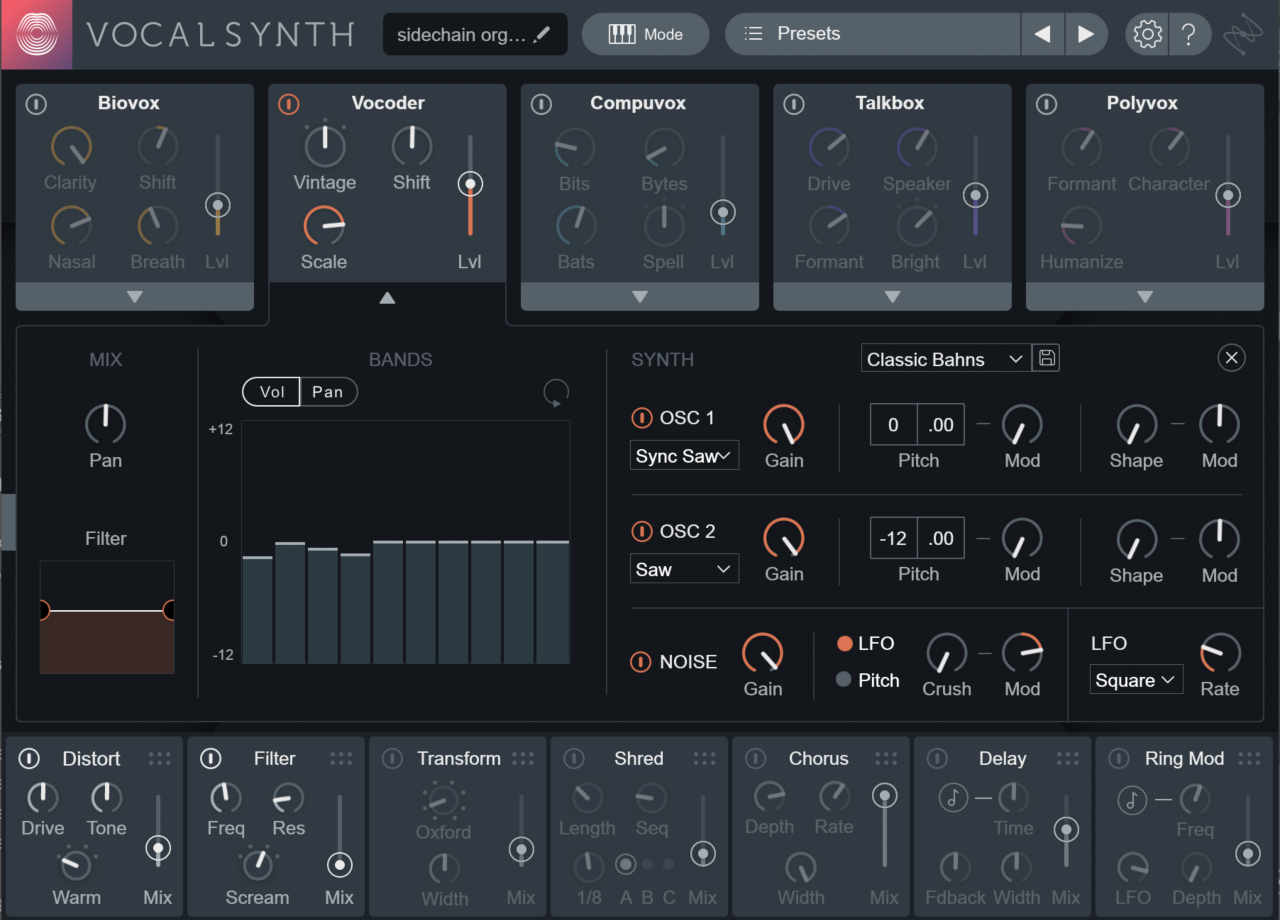 Or I could go “crazy go-nuts” and wander off the beaten path, using each of the five main modules together: 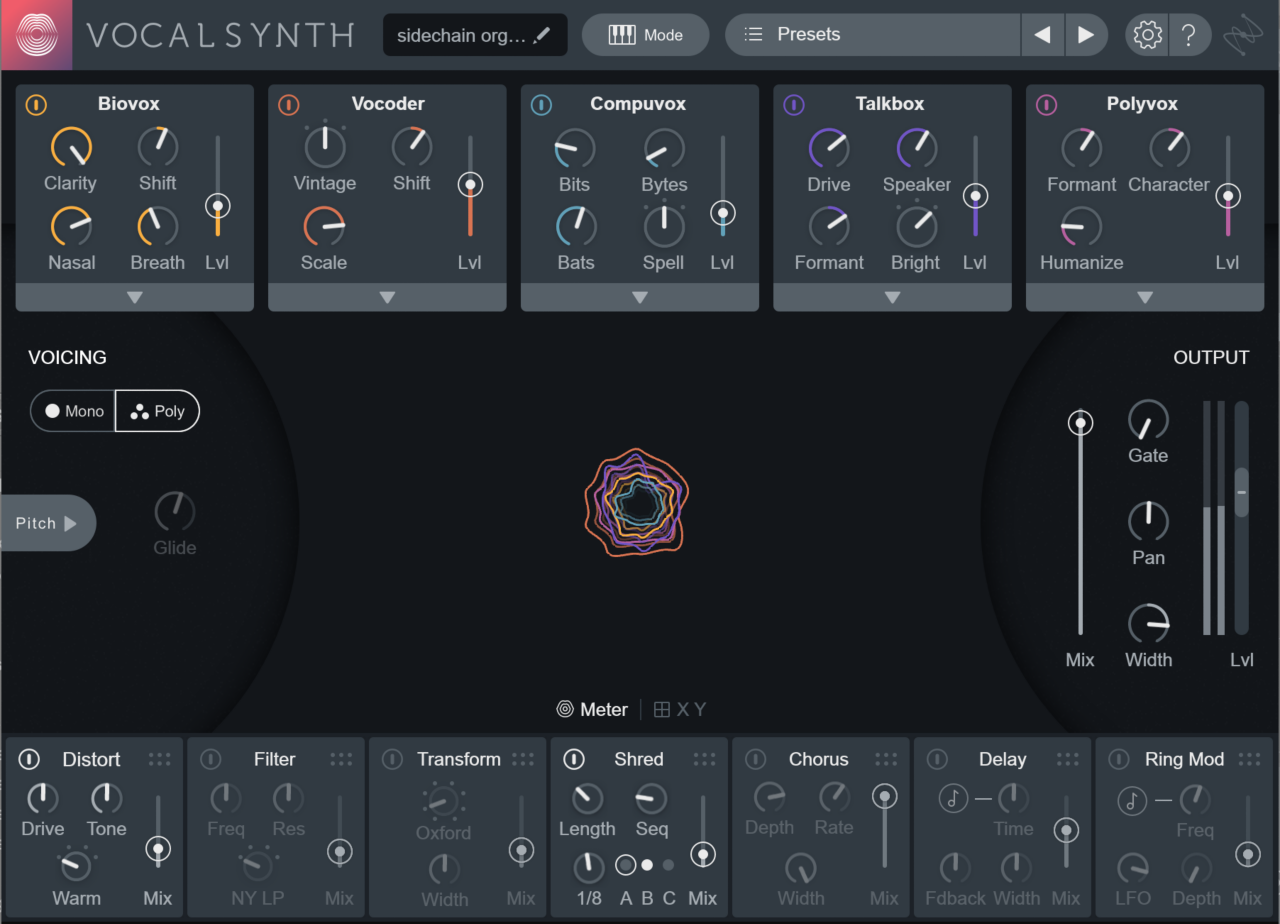 Undoubtedly, we have only scratched the surface of what VocalSynth 2 can do. It goes far beyond a typical Vocoder or Talkbox—indeed, it is loaded with parameters that elevate each module beyond its typical use-case. So, as always, I encourage you to experiment. Run some practice sessions of your own, and you’ll get this synth talking to you in no time at all.

Learn how to use VocalSynth 2 on vocals and more: