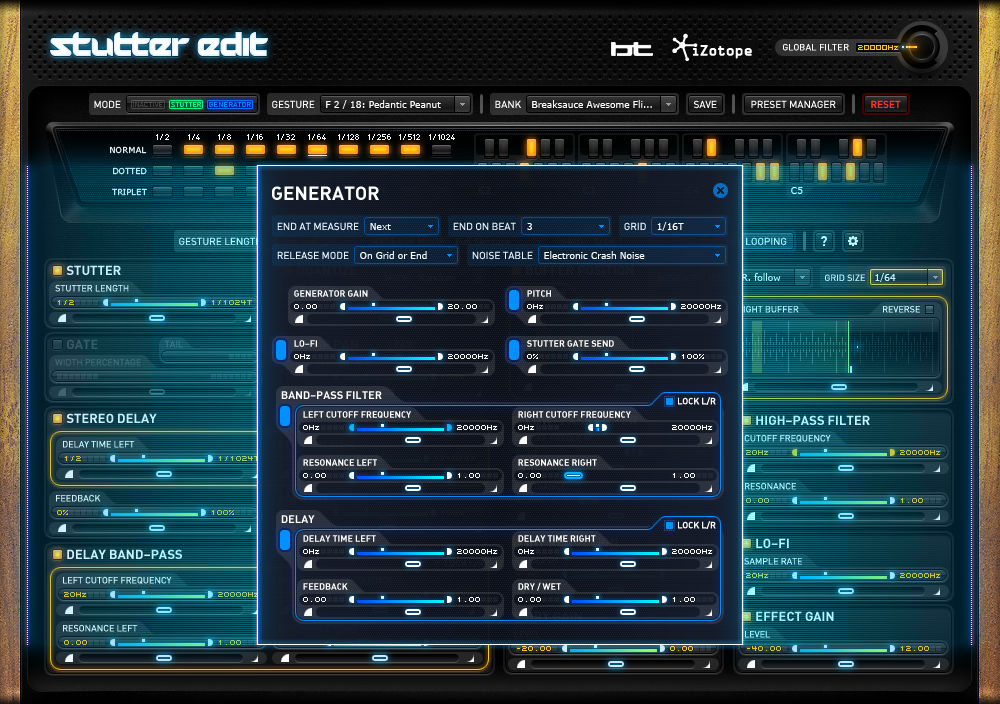 We recently showed users how to learn Stutter Edit in 10 minutes, and then deploy it for expanding rhythmic possibilities. Now we turn to the more textural side of sound design and music production, using Stutter Edit as a tool to generate unexpected tones for both the recording studio and concert halls.

Below are few methods of approach to reshaping your sound, or rethinking your approach to sound design. Whether you want to make your ambient track more texturally varied, or chop and screw with your track’s overall movement, the uses below will hopefully inspire you to get creative with Stutter Edit.

As can be heard in the dry mix of “Photosynthesis,” the track is ambient and relatively lo-fi. When Stutter Edit is introduced, however, the track takes on a whole new dimension. The sound we wanted was a combination of the lo-fi of the original recording—a Waldorf Blofeld run through various effects—and the hi-fi of Stutter Edit’s various modules, triggered by a Korg Monologue’s 16-step sequencer. The wet version features the Stutter Edit remix alongside the original mix to preserve more of the chord progression’ integrity. 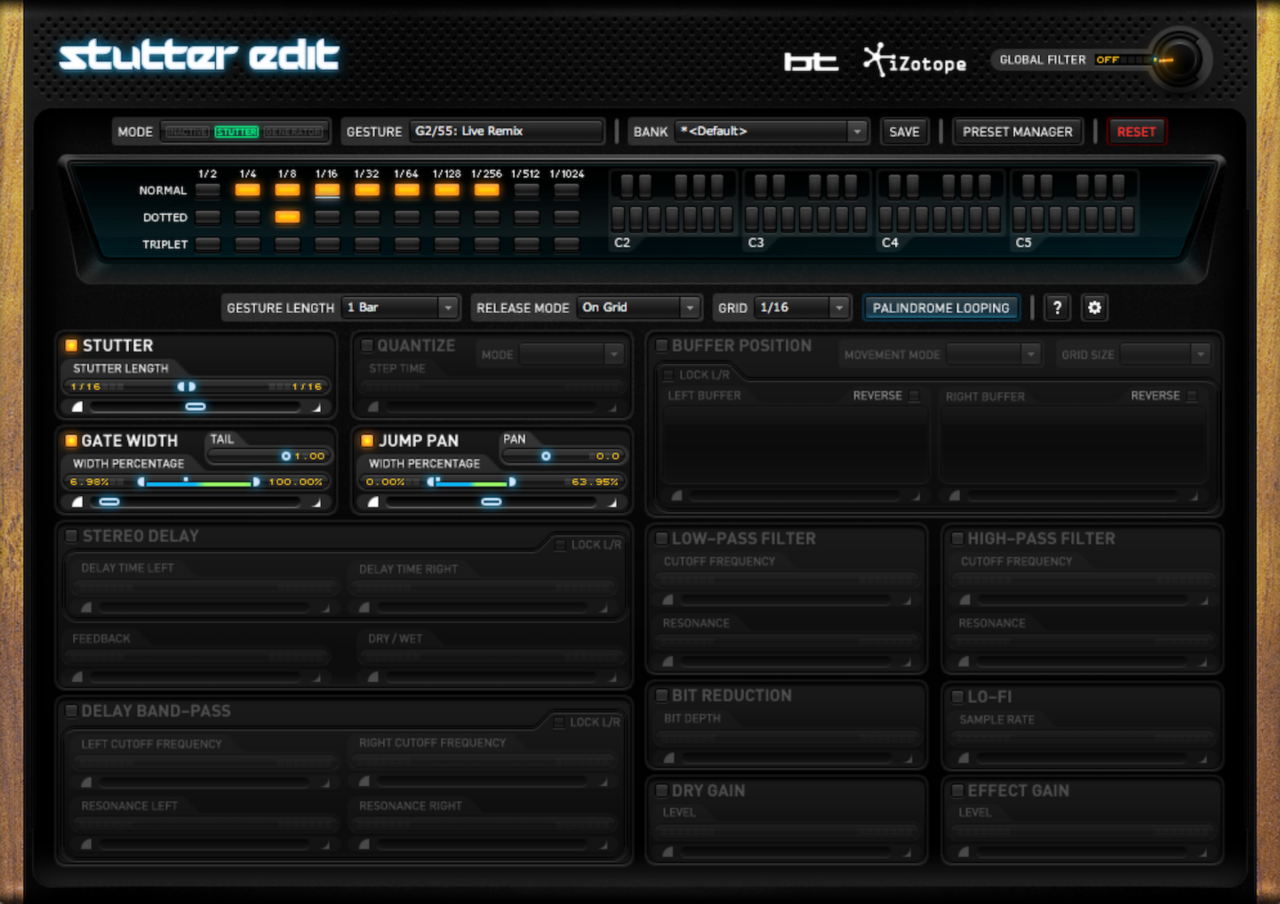 One of the gestures in “Photosynthesis.” This one features just the Sutter, Gate Width, and Jump Pan modules.

The Stutter Length sets a sweep-through that ranges from 1/8 and 1/16 on the low end, to 1/64 on the high end. The Jump Pan caused the gestures to sweep wildly from left to right, something that can be heard clearly in headphones. And because Quantize is activated and set to Skip, it moves through selected Matrix note values in the pattern. 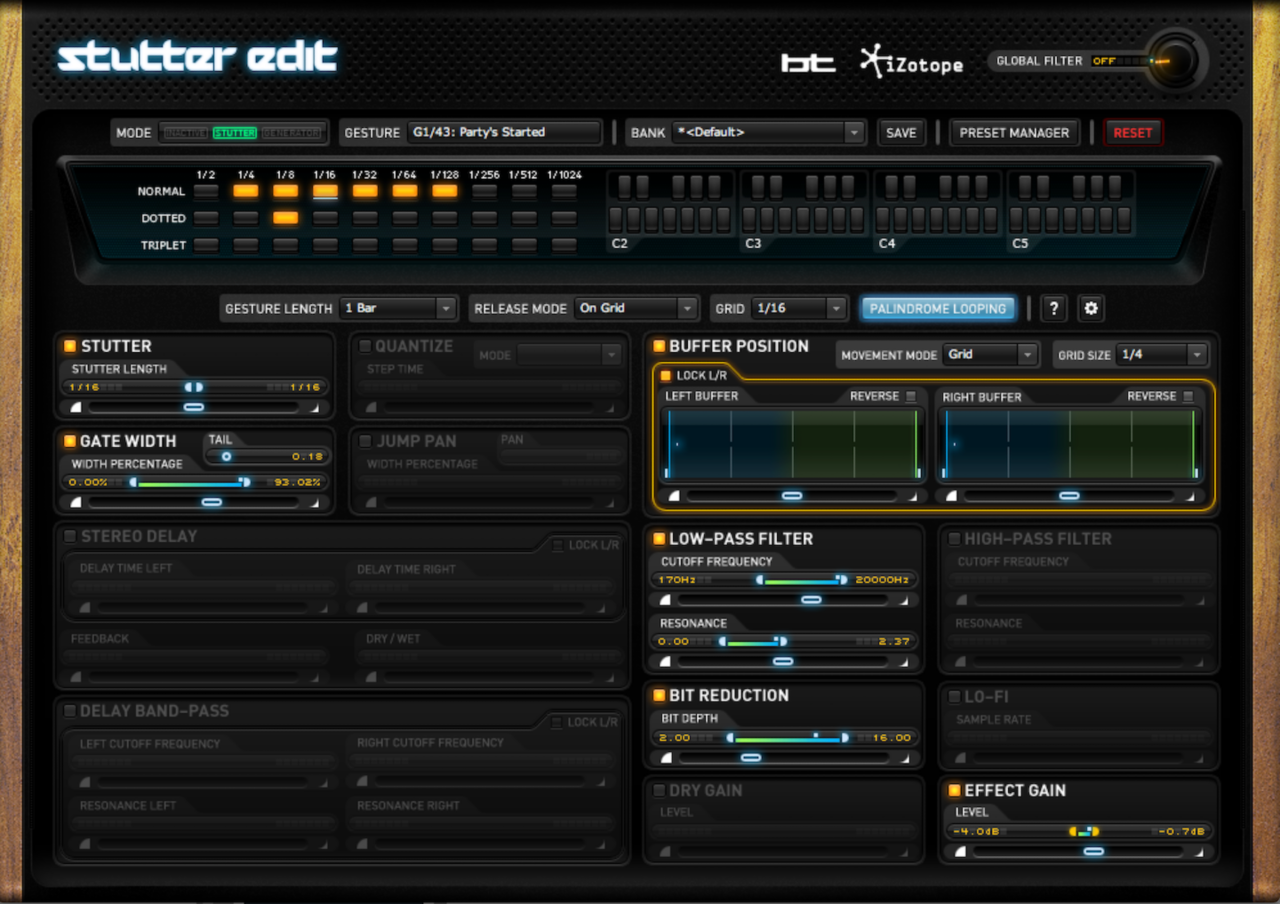 These few gestures are just a fraction of what is going on in this remix using the Stutter Edit default. Given the sheer number of notes triggered by the 16-step sequencer, there are just too many to break down trigger by trigger.

The takeaway: if you want to create experimental sounds when using Stutter Edit, fine tune each gesture (set of effects) that is triggered by individual note, and unleash a step sequencer to automate the process for you.

For dance tracks, whether they’re being recorded in the studio or played live, the breakdown is always a welcome release. It gives both home and live audiences a breather to contemplate that which has just unfolded and all the rest to come. For the artist, breakdowns also serve as the perfect opportunity to experiment.

The song below is a dance track in the acid house mold, created on an Elektron Digitakt. The first audio sample is the audio track unaffected by Stutter Edit. The second audio sample is a possible breakdown that could come at some point during the song’s running time. 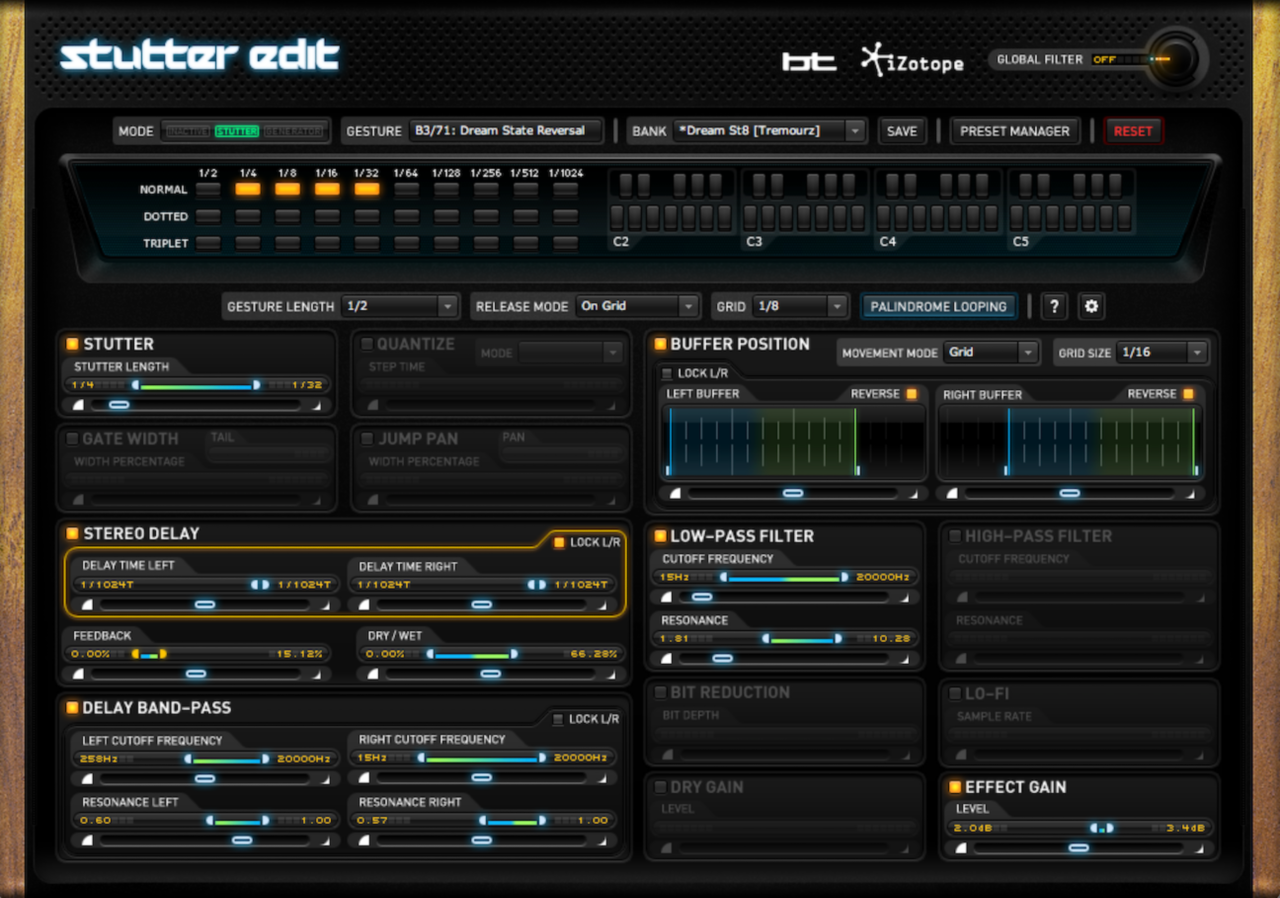 One of many gestures in “There You Are,” with over a dozen gestures triggered by the Monologue’s 16-step sequencer.

For the breakdown, we use the Dream State Reversal gesture, this time triggered by a single note on the Monologue instead of many notes on the step sequencer. This gesture features the Stutter, Stereo Delay, Delay Band-Pass, Low-Pass Filter, and Effect Gain modules. It comes from the *Dream ST8 [Tremourz] in the Resonator bank Dream ST8, but features some slight tweaks.

In our version here, the Low-Pass Filter is added to the gestures, with Stutter Edit sweeping the Resonance between the values of 1.81 and 10.28, giving it a little filter sweep. Basically, it sounds as if a sample of the main melody has been chopped, reversed, and looped. In a live setting, a DJ could introduce this breakdown and then apply effects to create swirling breath of trippy fresh air before reintroducing the beat, and taking the song back into its dancefloor beat.

There You Are (Before Stutter Edit)

There You Are (After Stutter Edit)

One of the great pleasures of using Stutter Edit is experimenting to find new and strange electronic textures. A good way of doing this is by creating some automation behind Stutter Edit’s own automation.

As hinted at above, a lot of experimental textures can grow out of using a sequencer to automate Stutter Edit. And things can really get interesting when you mess with tempo, whether it be taking it to insane heights like 230 BPM, or slowing it way, way down. Gesture 1, triggered by the first note on the sequenced Korg Monologue.

For our track below, we programmed a four-note sequence on the Korg Monologue, then dropped the tempo down to 56 BPM on the synthesizer, while keeping the tempo at 120 BPM in Ableton Live. This laid the groundwork for strange sonic juxtapositions, which Stutter Edit’s *DPS [Devine] gestured amplified with all of its varied module mangling. 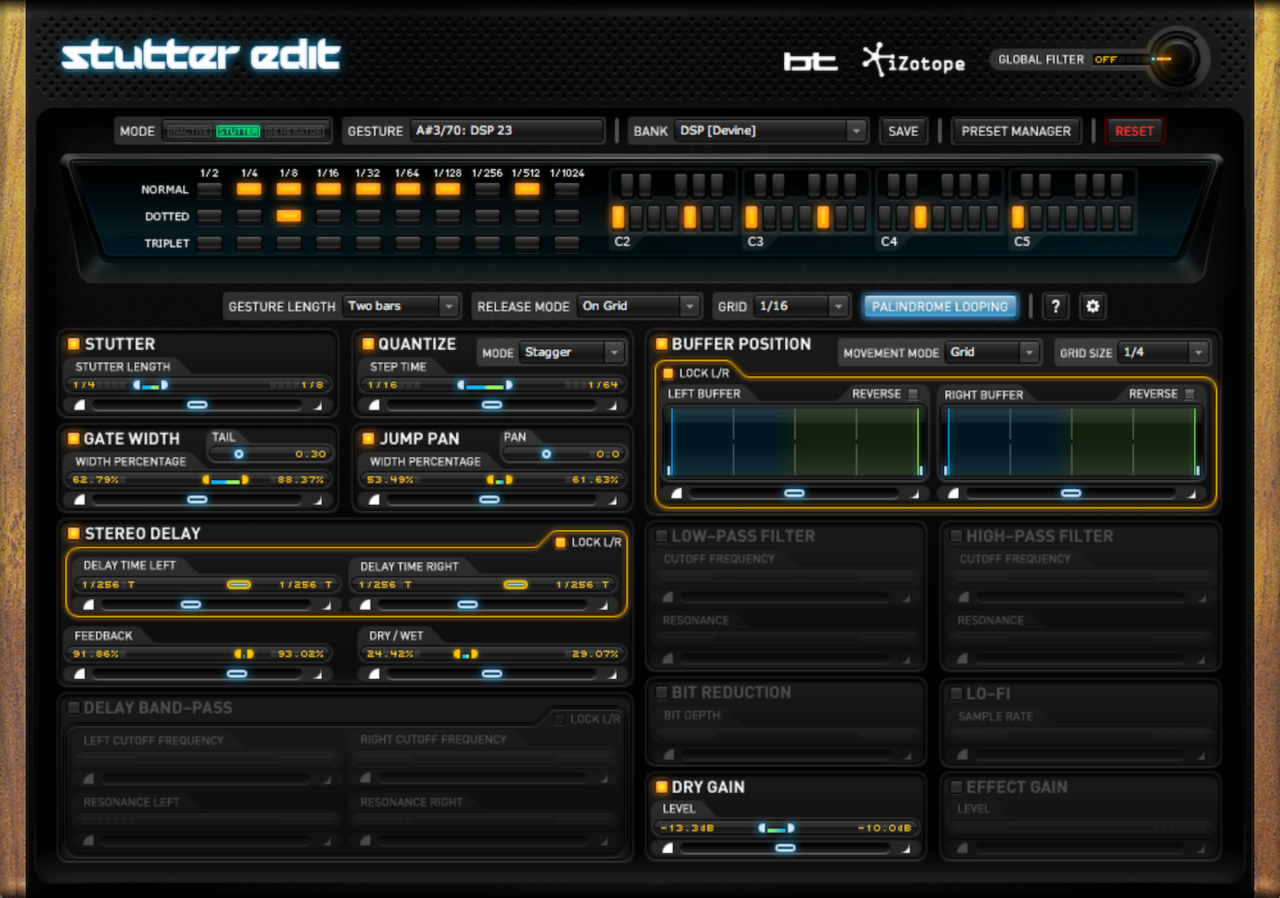 Gesture 2, triggered by the first note on the sequenced Korg Monologue.

The first two notes of the sequence feature slightly different variations on gestures that include Stutter, Gate Width, Stereo Delay, Buffer Position, Quantize, Jump Pan, and Dry Gain. Both of these gestures feature a sort of ping pong stereo effect, but the slow tempo makes the results very pronounced in a psychedelic way. The third note’s gesture contains these modules as well, but also features the Delay Band-Pass and Low-Pass Filter, which gives it a sort shimmering phase effect that sounds as if a YouTube video is buffering, but at a steadily fast rate. The fourth note utilizes the same modules as the first two gestures, but it sounds more like an LFO operating at such a high rate that it’s on the verge of creating a drone. Gesture 3, triggered by the first note on the sequenced Korg Monologue.

The overall result of this combination of sequenced gestures is a mix of audio that conjures thoughts of cyberpunk. With Stutter Edit, the new mix sounds corrupted, like a ghostly song emerging from a hacked computer terminal, funneled straight into the masses’ headphones.