Neutron 3 Advanced sports a feature called Mix Assistant. Its aim is simple: to give you a good static mix and let you get to the fun parts of mixing faster.

When I first heard about it I balked a bit; why would I want to cede a vital part of the mixing process to an algorithm? Furthermore, if the pros are to be believed, the job of the static mix is to match the rough. You’re supposed to build upon the rough, to improve upon it. How could this software help you in matching a producer’s rough?

Luckily, I had an album in my queue suitable for testing the process—a project from songwriter Jonathon Birkholz called Synthscape. I had to mix and master this record in a little over a week, giving me five days for mixing and two days for mastering.

Normally, mixing a record in a week isn’t hard, provided my schedule allows for it. Mine, however didn’t—I’d have four hours a day for this process, and I needed to get two mixes done, start to finish, every day.

I did have some free time on a weekend to make static mixes, so I put Mix Assistant to the test. Half of the tunes went through Mix Assistant. I balanced the other half in a variety of ways.

On every track, I loaded Neutron first in the chain. Then, I selected a track, opened Mix Assistant from the GUI, and chose “Balance.” The following screen popped up: 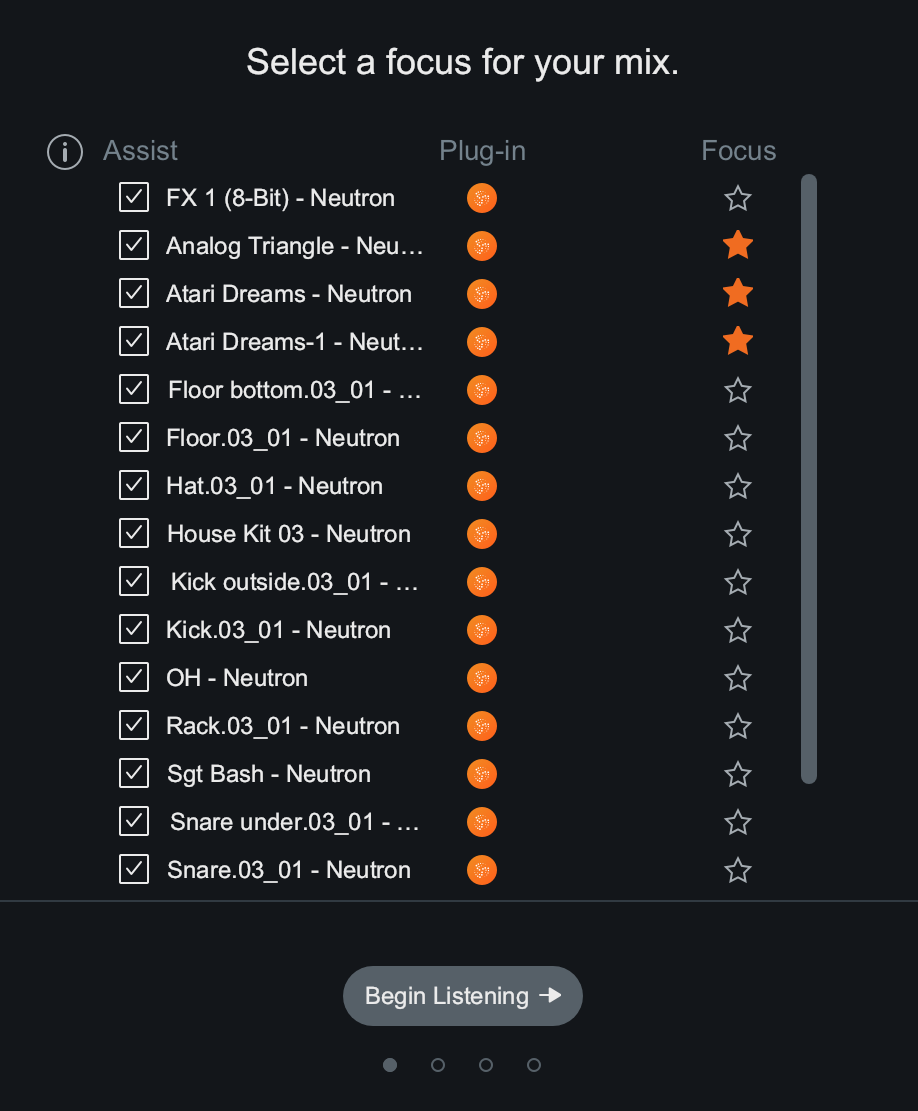 Set a focus for your mix.

From here, I had to select focus elements. As the bass carried the melody in certain sections, and two synths carried in others, these elements became my focus. I assigned them a star (aka the "focus"), and played the track through from start to finish. 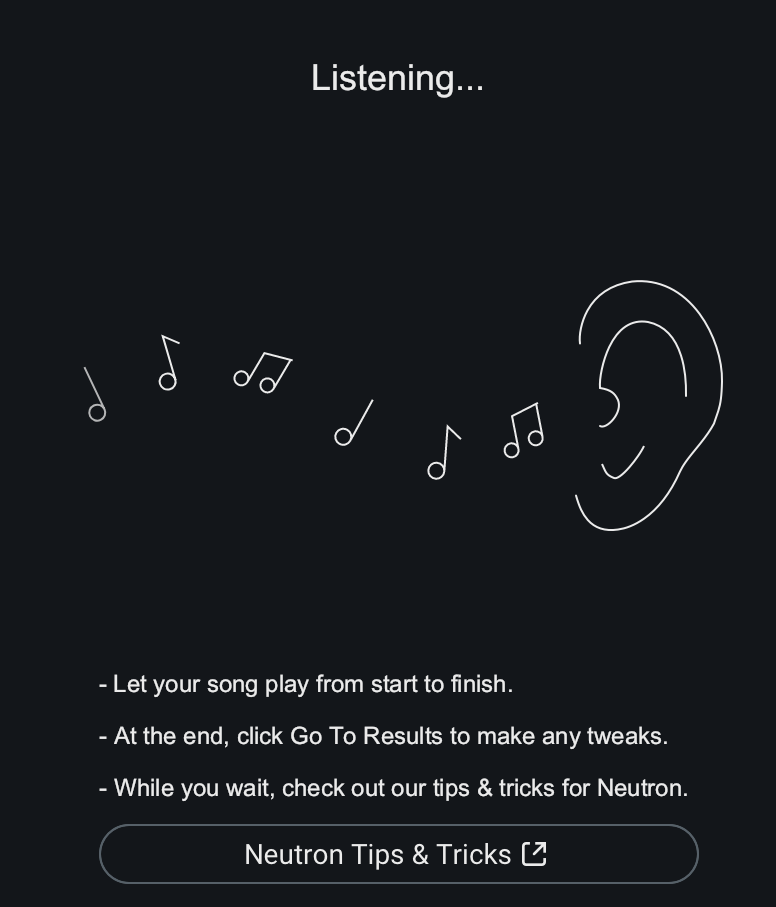 When that was done, I was met with the following screen: The algorithm is smart enough to classify instruments and to let you know when they’re not present. Note how the vocals are grayed out, this project sports no vocal, it’s a synth-jazz record.

Using my ear, I decided to tweak the balances further, which is easily done from the GUI in Neutron. This was the result: I hit accept, and it was on to the creative process!

Though Mix Assistant had calibrated all the tracks in my mix, you can see all the faders were left at zero.

Neutron on tracks in a session

Neutron automatically adjusts the output of each track to achieve its balance, as you can see in this screenshot: Contrasting Mix Assistant with other methods

Here were the other ways I set up static mixes:

On one track, I chose a target level of -21 RMS and, using meters, gained each track up or down with Relay until it averaged -21 RMS in its loudest section. Then, I brought each track down to -∞ and began the static mix. This method allows me to situate my faders at a healthy position, and ensure that no single sound is innately stronger than another. Some have called this the “equal voltage” method of balancing (see the second tip in this article for more information on this method).

For other songs, I used the pink noise method wherein I set up a pink noise generator hitting -21 RMS. Then, I solo'd each track against the generator, and gained each track up or down with Relay until it was just audible over pink noise. After that, I brought all faders down to -∞ and went about a static mix. The results are roughly the same as the previous method—a balance between each sound at the outset, resulting in healthy fader levels, healthy relationships between tracks, and preserved headroom across the board.

The last method was more of a wing-it approach: I took a consistently playing element, such as the bass, and adjusted the fader so it consistently hovered around -21 LU (short term) in the meters. Then, I went about setting up my static mix on the faders, using the bass as my anchor point, all while watching the meters to ensure I didn’t blow past -21 LU.

For the first tune, entitled “Bob” (listen to the album version here), I took some extra time and set up two static mixes—one through Mix Assistant, the other calibrated to pink noise. After I got my initial balances from the processes, I panned the individual tracks. You can hear the results below.

This is my pink noise static mix:

And this is Mix Assistant:

In the Mix Assistant version, I hear a better balance between the electronic and acoustic percussion. The synths also seem to sit better, and I prefer the overall drum positioning. Of course, this is a subjective determination, so make of it what you will.

The artist I was working with, Jon, had presented me with a rough mix of every tune. However, the rough mix lacked acoustic drums, while my sessions came with drums supplied.

Jon told me he liked his rough mixes, so I felt my job was to honor them while adding the weight and propulsion of acoustic drums.

In short, I had a conundrum—how was I to implement Mix Assistant when I had to match the producer’s rough? How I proceeded led me to two actionable tips:

If your stems don’t match the rough mix, proceed as follows:

If the original stems don’t match the rough, but you’ve got new parts as well, here’s how to proceed:

This may look like a lot of steps, but it goes quickly.

We’re trying to achieve a level-matched comparison of the rough mix (plus the Mix Assistant processed tracks not in the rough) to Mix Assistant-processed results.

If you’ve done this right, you should have a plug-in on the first slot of your stems that don’t match and ROUGH bus. Furthermore, you should be able to select all these tracks and bypass the plug-ins with the click of a mouse. You’ll hear the rough (plus balanced new tracks) against what Mix Assistant is doing, and be able to judge which is better.

Now here’s a caveat: if matching the rough mix involves complicated routing schemes and setting up delays, reverbs, and other plug-ins, you should probably forego Mix Assistant altogether.

When you implement Mix Assistant, it gives you a mix that hovers around 21 LU. This is more than enough headroom for you to accomplish everything you need in the mix process.

Yet, headroom is the easiest thing to mess up when you’re just starting out (and sometimes even when you’re mixing professionally). Lost in the mix for hours at a time, you may not notice that an element constantly clips the digital output; you may be making the mix harsher without realizing why.

A starting point well below the threshold of clipping, one designed to preserve headroom, is welcome.

Another aspect, though cosmetic, that I still find fantastic is that you get headroom while your faders sit at zero. No longer do you have to drag your faders lower and lower to stay out of the red; you have the satisfaction of using the mixer’s GUI like a real console. Having worked on a few boards in my time, I can say it feels really satisfying.

Mix Assistant allowed me to get to the fun stuff quicker. The voltage-leveling or pink noise methods? They take five minutes or longer per song, depending on the track counts. It feels like ages, and messes with my focus.

With Mix Assistant, one moves quicker into the creative realm, which, in my case, results in catching potential issues more quickly and attending to them with a greater degree of confidence.

In one tune, I cut out all acoustic drums at the intro, letting the electronic percussion hold sway instead. The timbre and feel of the acoustic drums were good, but they did not match the spirit of the arrangement. Having them enter later created a more dramatic impact anyway.

I’m willing to bet it would’ve taken longer to arrive at the same decision without the help of Mix Assistant. Why? Because I would have spent so much time fine-tuning and balancing each element in the static mix, forcing the square pegs of incongruent sound into round holes. I would’ve had more invested in a bad sound, simply by virtue of the time I had taken.

Pleasurable findings: an increase in productivity

For me, the most important question is “how much faster can I work with Mix Assistant?”

But how could one even measure that?

Well, if I kept notes, I could catalogue the amount of time spent on each mix, and see if that told me anything. Since half of the songs made use of Mix Assistant, and half of them didn’t, I’d have a point of comparison to measure my productivity.

Luckily, I keep copious notes while mixing, and I time stamp my sessions for each new version.

For the tune “Bob,” which utilized the Mix Assistant, the initial mix took 1.5 hours, and addressing Jon’s mix notes took 45 minutes. "3rd Phase," another Mix Assistant tune, took an hour to mix and 30 minutes for notes.

It seems Mix Assistant not only expedited the process, it made up for the time I didn’t have: I had only budgeted two hours per tune for the initial mixes, and some of these songs took longer. Mix Assistant allowed me to make up the extra hours.

This is a small sample size, and it’s heavily subjective. Not only that, each song was different. Some tunes had editing issues—one in particular required me to go hunting for different drum takes because the high-hat distorted on a seminal part of the song.

Nevertheless, the data accrued was enough for me to keep considering Mix Assistant in future projects.

This article is personal, describing how Mix Assistant helped me mix a record in short order. I’ve explained how it helped me preserve headroom, make better decisions, get to the fun stuff quicker, and save time.

I’ll leave you with a befittingly personal ending: despite my initial skepticism in having a virtual Mix Assistant, I liked using it. I didn’t feel as though it took agency away from me; it just made things faster. But then again, I’ve balanced plenty of songs by ear.

If you haven’t, I could see how the Mix Assistant could become a crutch in the wrong hands; when it comes to level balances, it does offer a shortcut.

So, don’t treat it like a crutch. By all means, use Mix Assistant on a track. Then, in your free time, put up the mix again from scratch, without Mix Assistant. Believe me, it’s worth it—it’s when you already know how to balance a tune or set up a static mix that you really begin to appreciate this tool.