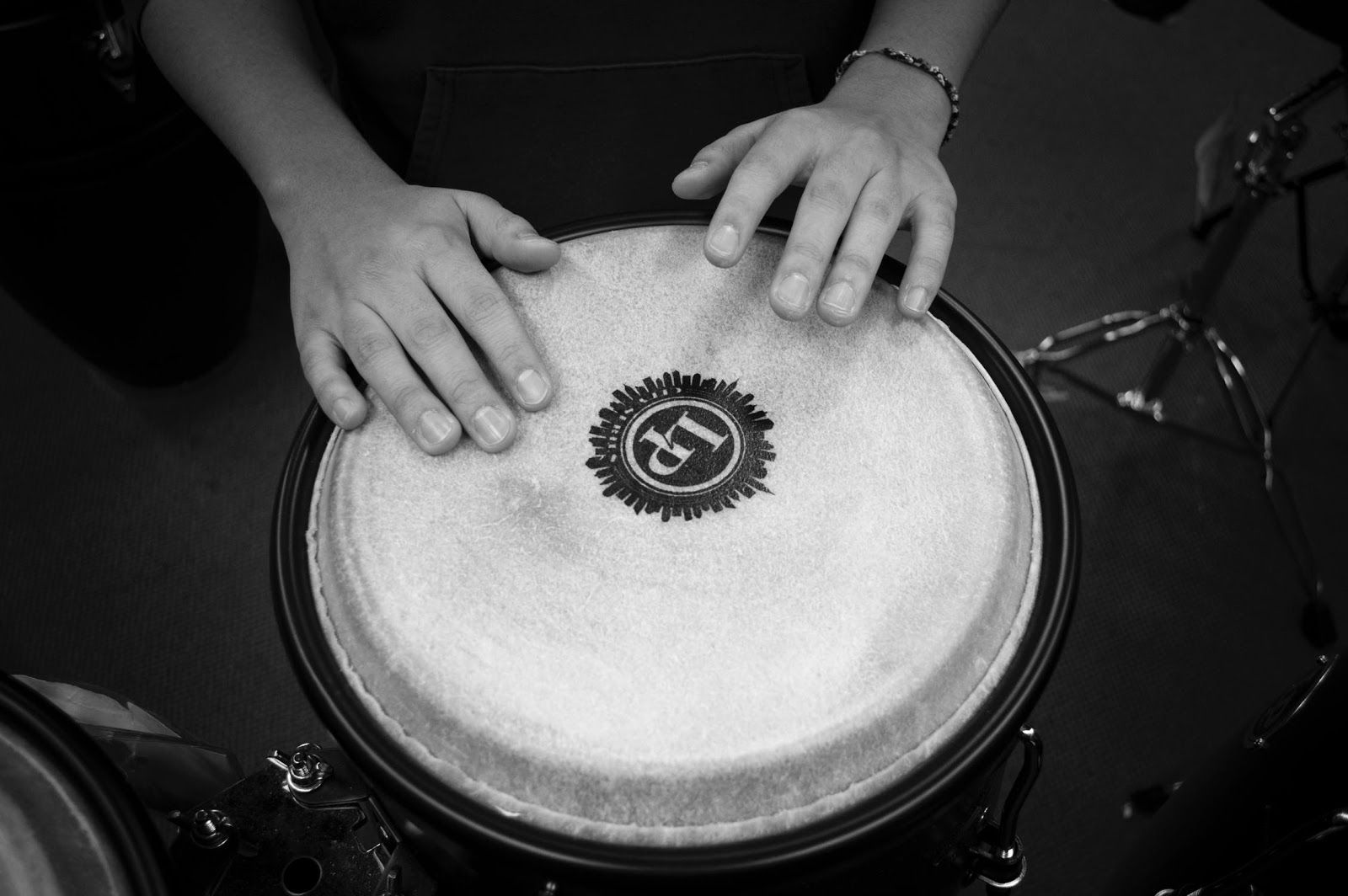 This week, continuing our journey in the land of custom-built samples, we build a drum kit using Spire Studio. It’s tempting to slap on Stylus RMX, Machine, or Battery to put a groove together, but it's a surefire way to make your music sound identical to everyone else's. Nothing can beat a custom drum kit built entirely from your own unusual sounds.

Listen to the final groove below, and learn how to create a custom, sampled drum kit using Spire Studio.

From low pitched "bams" to high-pitched "scapes," your home is a treasure trove of inspiring sounds. It's time to tap into their musical potential. Keep your ears open to how different objects produce various sounds. Notice that a sound's timbre may be altered depending on a few things, like the material hitting the "drum," the material the drum is made of, and material the drum is placed on. Listen for anything that creates an interesting sound. Could it be turned into an instrument that resembles a kick? A snare? A hi-hat? The possibilities are endless.

Use Spire Studio to get recording done quickly. The built-in studio-quality microphone allows you to record your samples wherever they may be. Recording drum samples can often lead to clipping, but the Soundcheck feature sets an initial level balance to help mitigate this issue. Plus, the fact that it's portable (doesn't require any cables or power cords) means it can go anywhere without the hassle of unnecessary setup. For tips on how to get the best audio recordings of your samples, check out my article on creating custom samples with Spire Studio.

You'll want to record at least three different sounds so you'll be able to replicate a basic drum kit using your own custom sounds. You can expand your custom drum kit with additional recordings that can be used as cymbal(s), various toms, a shaker, and tambourine.

If you want to make your new original drum kit really superb, I recommend you record each sound multiple times, as well as at different velocities (from hitting it gently to striking it with intensity). This will allow you to setup Round-Robin groups and different velocity layers, but more on those later on. In short, the more you record, the more options you will have to choose from later on.

Once your samples are recorded, transfer them to your computer for further editing in the DAW of your choice. Clean up any excess background noise with a tool like RX's Spectral De-noise. Then splice and crop the various samples to prepare them for the next steps. For all of this, please reference the Export and Cleanup sections of the previous article.

This is where your creativity will really get to shine. You are trying to create replacements for various drum kit sounds, so pitch the samples, compress them, run them through a guitar amp, and/or EQ them to your heart's content. Try time stretching/compressing them to achieve even crazier effects. And don't forget about the possibility of layering different samples together.

Once you've created and designed the perfect sound, you'll want to bounce it in preparation for the final step. If you created multiple alternate hits for one instrument (for velocity layers or round robins), make sure to bounce each "hit" separately.

The final thing you'll need to do is import and set up your samples in your sampler. For this, you can use any sampler of your choice. It can be either one that’s built into your DAW, like EXS24 (Logic Pro X), Simpler (Ableton) or Sample One XT (Studio One). Alternately, you can go with a 3rd-party sampler like Kontakt. I'll be using EXS24 in Logic Pro X. You’ll want to reference your sampler’s user manual for details on how to operate it. Check out this article for a quick primer on the basics of samplers and using Simpler and Kontakt.

Because drums aren’t melodic, you don't need to have your samples pitched across the keyboard. The sample should be played back and be triggered using only one single key. I recommend you use the General MIDI Standard Drum Map as a starting point for deciding where you will place each instrument. If it's a kick, place it on C1. If the sound will be used as a snare, use D1. A hi-hat? Use F#1. And so on.

To one-shot or not?

One-shot (stylized as 1Shot in Logic) is a term used for when you play back the sample in its entirety without interruptions. Imagine a piano: When you press a key, you hear a note. When you let the key go, the note's sound stops. This is how most sampled instruments are set up. Pressing a MIDI key triggers the "MIDI Note On" event, which makes the sample begin to play. However, letting the key go will send a "MIDI Note Off" event, which will stop playback, cutting to silence whether playback reached the end of the sample or not.

For drums, you want to hear the full sample without it ever cutting off. This is where 1Shot comes into play. This setting makes the sampler ignore the "MIDI Note Off" trigger, effectively causing the complete sample to play whether you play a really short note or hold the key for a long time.

Once you have your sample setup, you are ready to start playing! Get your groove on and begin performing your new sampled drum instrument. You can use your MIDI keyboard or drum pads on your MIDI controller to trigger the sound.

Take a listen to the steps I took to create my original sampled "Aggressive Hi-Hat" instrument:

Once you successfully create your first custom drum instrument, you will repeat the above steps for each of the other sounds you recorded. Cleaning up, editing, processing, manipulating, altering, bouncing, and importing into your sampler. Follow these steps and you will be able to set up a complete drum kit filled with your own sounds that you can trigger using a MIDI controller.

Each time you trigger a sample, it sounds identical because you only used one sample. This is problematic when playing the same sound in quick succession (like 16th note hi-hat runs), as each sounds identical. This is why round-robin groupings of slightly different but similar samples were invented, giving you multiple “hits” to choose from.

Let's take our hi-hat as an example. Rather than preparing one sample, I created three, consisting of three different hits. You could map them to three separate keys, giving you precise control over when you want to use which one. However, you'll also have the option to group the sounds together, assign them to the same key, and set them up as a round-robin group.

Take a listen to how all three hi-hat samples were taken through the above steps to achieve a round-robin group and how it allows each hit of my hi-hat sampled instrument to sound altered.

You can hear the three separate samples, which on its own may sound repetitive. But in context of a whole groove or song, this would be harder to notice. You could also set up the round-robins as randomized, meaning that a random sample will be chosen every time, rather than going in sequence. This will bring your custom instrument even more to life, making it sound less robotic and more interesting.

To create more realism, you'll want to try using Velocity Layers. No two drum hits are ever truly the same, in part due to slight differences in velocity. Harder hits can cause more vibration and a brighter sound. Softer hits can have a darker timbre. The majority of samplers allow you to assign a particular sample to a specific velocity range.

Let's say you have four samples of the same instrument recorded at four different intensities: low, medium, high, and very high. You could map these samples onto a single note, with one being triggered according to the velocity that's played:

This way, a different velocity is played depending on how hard you hit your key, just like in real life. The harder you play an instrument, the louder and more aggressive the sound should be. Some samplers will also allow you to create crossfades between different velocity zones, so the difference isn't as pronounced when going between 90 and 91. Again, you'll want to reference your sampler's manual for what options are available to you.

I decided to take two different samples recorded at four different velocities and combine them into something that sounded like claps. Here's the final outcome:

Here are the remaining sampled drum instruments that I created to round out my setup:

Kick: a foam roller hitting the back of a chair (duplicated and processed in separate ways to make it sound fatter)

Snare: consisting of vocal “bams” sung into a metal sports bottle + the sound of a fist hitting a chair.

Glass: wooden spoon hitting the outside of a metal sports bottle

Now I have a complete and playable custom drum kit, which I can use on any song I create! And the best part—this drum kit is entirely unique to me! Nobody else on the planet has the exact same drum kit. Here's a quick demo of the whole kit at work (with a bass and keyboard part).

If you want to level your songs up even further, collaborate with others. Send a recording of your brand new groove that uses your custom drum kit to a friend using Spire Studio’s project sharing feature and have them layer additional instruments on top!

Now you have a playable drum-kit that’s 100% novel, fresh, and individually yours. I'd love to hear the awesome custom kits you end up creating. Shoot us a message and share your creations! Here's to the incredible new sounds you are about to produce!