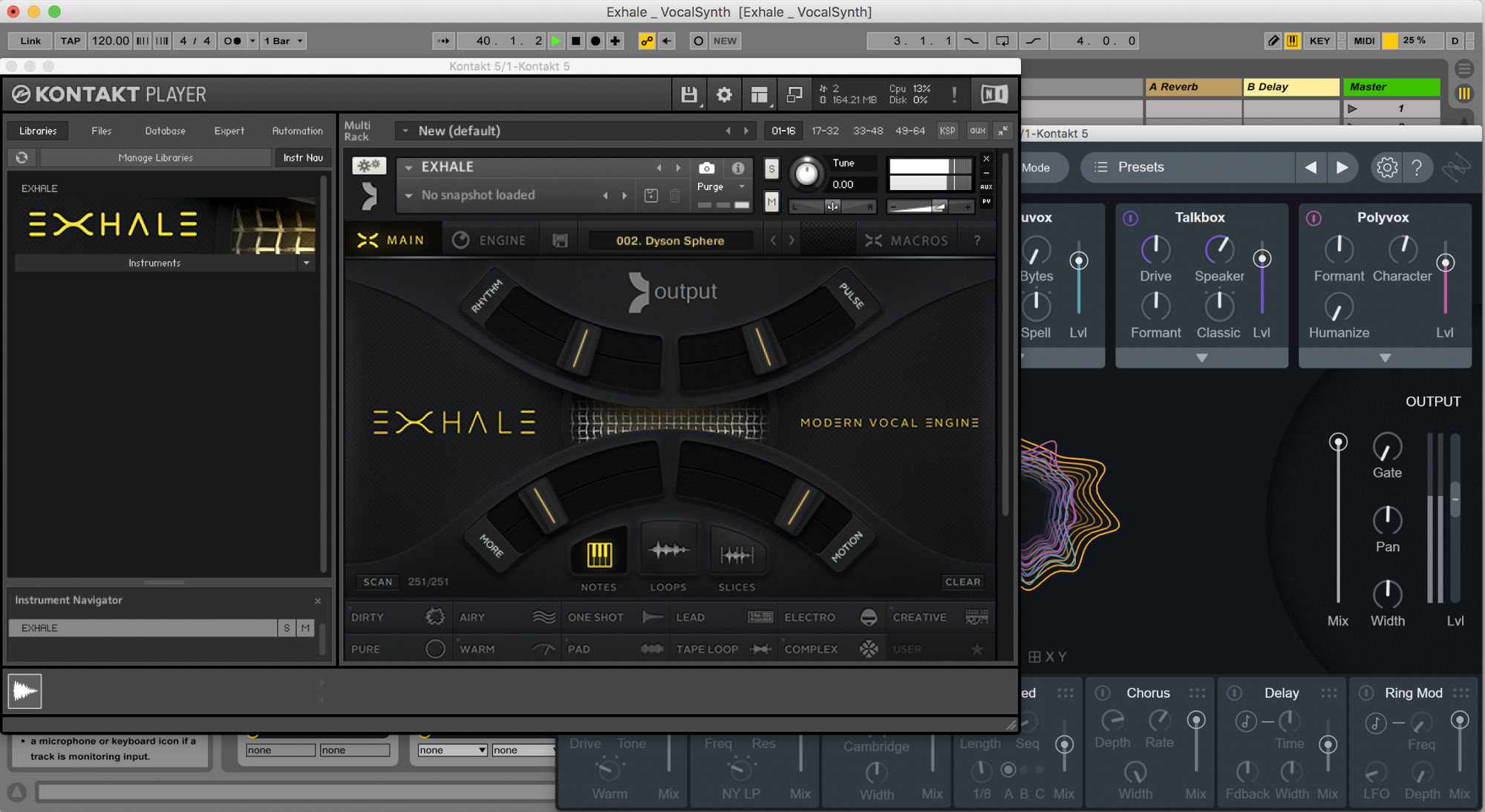 EXHALE is a vocal engine for playing, creating, and manipulating the human voice, created by our friends at sound design boutique Output. With over 500 presets of modern vocal sounds, it only made sense that we gave EXHALE a test run with our own VocalSynth 2 as a dedicated processor.

In this article, we look at three important aspects of modern hip-hop and pop production using the two plug-ins in tandem: song starters, vocal hooks, and choral sections.

Starting a studio session with a blank DAW is intimidating. Do you program some drums? Tweak a sample? Write a progression? There are a lot of routes to take but no clear direction.

I found a simple solution to this common music producer problem with EXHALE Loops, a mode that maps 13 unique tempo-synced vocal loops to keys C2–C3 via MIDI. You can trigger a single loop or play multiple at the same time. With four macro controls (Talk, Pitch, Motion, and Wet) the loops can be shaped into new forms.

To break through a creative block, arrange a MIDI pattern between C2–C3 and audition it with a selection of arbitrary presets. Since each MIDI note in the predefined range fires off a unique vocal sample, you get exposed to a wide variety of sounds—both melodic and rhythmic—within in a matter of seconds, providing the inspiration needed to start a new song.

In the Loops Mode alone, there are 125 presets, so this showcase just barely skims the surface. Once you come across a loop you like, either use it as the foundation for a song or single out the sounds that caught your ear. If you’re not getting the results you want right away, change up the MIDI pattern. Alternatively, get a new perspective by changing loop key from the top bar, or sample start, effects, and ADSR values from the Engine tab.

I think the vocal sounds in the last loop have an interesting tonal quality and want to explore more editing and processing options with them. To give the loop more room to breathe, I rearranged the MIDI pattern with fewer sounds. For reference, the preset is 003 Cycles and the key is Cm.

For vocal character, I dialed in the Biovox module in VocalSynth 2. Biovox adds, enhances, and modulates common vocal features like nasality, breathiness, and vowel shape. For a deeper, raspy vocal tone, albeit with synthetic qualities, I enabled an oscillator two octaves down. The Polyvox module and Distortion bring out gritter textures to produce a darker atmosphere, and Chorus smoothes out the roughest edges so the granular effect is not overdone.

Paired with a drum beat triggering sidechain on the vocals, we get the makings of a song sketch.

From here, either move on to add new song elements or repeat the process of flipping through Loop presets until you land on something you are happy with. Here is another take using preset 075 Club 87 and the same MIDI pattern and VocalSynth 2 settings.

The hook has a special place in hip-hop and pop. It’s the most accessible and memorable part of a song that, when done well, will circulate around the minds of listeners for days, weeks, and even months. Vocal hooks aren’t restricted to choruses, but often feature in them. To stand out in crowded Spotify playlists, it’s more and more common for songs to have multiple hooks.

EXHALE Slices Mode simplifies the hook writing process. Like Loops Mode, Slices maps vocal snippets to MIDI keys C2-C3. But instead of a grouping together a semi-random collection of vocals, the presets in Slices are sourced from the same vocal line.

This makes it easy for producers to come up with vocal hooks when vocalists aren’t around. If you already work with vocalists, the hook you produce can be a guide for them. To get the most from Slices, it's helpful to have a chord progression prepared. Enter the chord progression key in the EXHALE top bar so the presets are in tune as you audition them. I’m working with the four chord piano progression below.

Like arranging a chopped up record on an MPC, bring out your MIDI keyboard or controller of choice and experiment with playing out patterns until you find a combination that hits the spot.

I came up with three different hooks using presets 106 Dream Smile, 071 Nice Fem Hum, and 008 Slow It Down.

The first hook stood out to me and I want to dress it up a little in VocalSynth 2. I copied the hook twice and processed each one with slight differences in Biovox and Polyvox—the main difference being the formant pitch in one copy is transposed down two semitones and transposed up 12 semitones in the other. Panned hard left and right, then layered with the original, the three layers produce a wide stereo image rich in frequency content.

Listen for the vocal triple at the last bar of the loop. As the piano slowly opens, the listener expects something to happen. Right before heading into what would be a drop, the listener gets the extra surprise of the layered vocal hook. This makes for a memorable song moment that listeners will return to.

Hip-hop has long had a fascination with choral music. On multiple occasions, gospel hymns have made their way into productions from Childish Gambino, Chance the Rapper and Kanye West. These same artists and their peers regularly look to acapella groups, soul quartets, and the doo wop genre for sample material too. In mumble rap, it's not uncommon for rappers like Lil Yachty to make use of digital string choirs that range from uplifting to ominous.

Using the abovementioned artists as reference, I’ll show you how to craft soulful and modern hip-hop choral sections with EXHALE Notes Mode and VocalSynth 2. Notes maps two vocal sources chromatically to MIDI, so you can play chords and melodies that fit with your music, as you would with a soft synth.

There are over 200 Notes presets so I suggest narrowing down options using tags like Pure, Airy, and Warm. I selected preset 071 Another Choir, but modified it from the Engine tab, switching out the default sound sources for new ones. To do so, click the Source icon and choose from the available sources in the resulting menu, like “Smooth Oh” and “Strong Ooo,” which were my picks.

Musically speaking, “soulful” is related to a sweet kind of sadness. While plugins can help with sound selection and manipulation, these emotions typically come down the chords used. I’m using the following progression: Gm-A7-Dm7-Dm.

A good start, but it sounds too choral to me, if that makes sense. With VocalSynth, I roughed things up with Distortion and Transform, an amp and speaker emulator, set to Radio. Polyvox is used once again, this time to shift the vocal formants slightly deeper in pitch. Together, these settings make the choral section sound like it was cut from a dusty old record.

For a more modern electronic sound, I dialed in Ring Modulation and synced the LFO to a 1/16 note rate. This produces a wobbly synth movement, commonly heard in future bass and dubstep. Taking what we went over in the vocal hook section, I added a second vocal part to spice things up too. Listen along with some trap drums and bass.