Learn about sidechain compression in audio plug-ins and how to use it effectively.

In this piece you’ll learn

Want to follow along in your DAW? Try a free trial of Music Production Suite Pro membership to access Neutron's sidechain compressor feature.

What is sidechain compression?

Hear the difference between an uncompressed track and a track that uses sidechain compression below.

To get a bit more granular, here’s an isolated audio example of the instrument that’s reacting to the input of the percussion to gain a better understanding of the processing:

Let’s start with the compressor. A compressor is used to reduce a sound’s dynamic range—that is, to make the louder and quieter parts of the performance closer to each other in level, be it an instrument, a loop, or even a whole mix.

Now, what is dynamic range? Most people use the term dynamic range to refer to the difference between quiet and loud sections in audio and musical programs. The phrase ‘Dynamic range’ actually indicates the difference in dB between the noise of an audio system and the level at which it distorts.

If the difference is too much, you can use a compressor to restrain the loudest bits, so that their amplitude doesn’t rise as high as it would un-compressed. This is one use for a compressor.

Compressors are audio tools, and audio engineers are naturally curious people who love to experiment. So, compressors have been used, throughout the years, to alter music in colorful, impactful ways.

Our goal is to introduce the concept of the sidechain, and build towards helping you understand sidechain compression in a holistic way.

What is the sidechain?

The term sidechain is a shortening of the phrase “side signal chain.” “Side”, here, means “different from the main input source” (i.e., whatever you’ve slapped the compressor on). “Signal chain” refers to gear that processes an audio signal—such as an equalizer.

In fact, the first use of sidechain compression involved an equalizer.

The history of sidechain compression

A cinema sound designer named Douglas Shearer wanted to make some spoken dialogue quieter whenever the actor said a sibilant word. He wanted, basically, to de-ess the signal—only de-essers didn’t exist yet.

So he invented one. He split the signal into two paths. One path went through the compressor, the other to an equalizer. With this equalizer, Shearer filtered the signal path until only its spikiest, most annoying ess sounds were prevalent. This signal was then routed into the compressor’s detector.

In the case of a de-esser, the rules are frequency-based: the boss is saying “only compress whenever you detect this super harsh frequency range,” and the compressor is saying, “aye aye, captain!”

Are you with me so far?

We’ve got the metaphor down—the sidechain has the ability to boss the compressor around—and we can move on to our next bit of business: internal sidechain filters versus external sidechain inputs.

These days it’s not uncommon for a compressor to have an internal sidechain filter. What does this mean? Within the compressor itself, you can tell the device or plug-in to ignore certain frequencies. You don’t need an external signal to boss it around.

Say you were compressing an entire drum set. Well, that kick drum has a lot of energy. Perhaps it has so much energy that it triggers the compressor when you don’t want it to.

An internal sidechain filter might come in handy here. It can help the compressor ignore the kick drum’s dominating low frequencies, filtering them out of the compressor’s detector circuit using an EQ.

A detector circuit, by the way, is just what it sounds like: it’s the signal path the compressor takes its orders from. 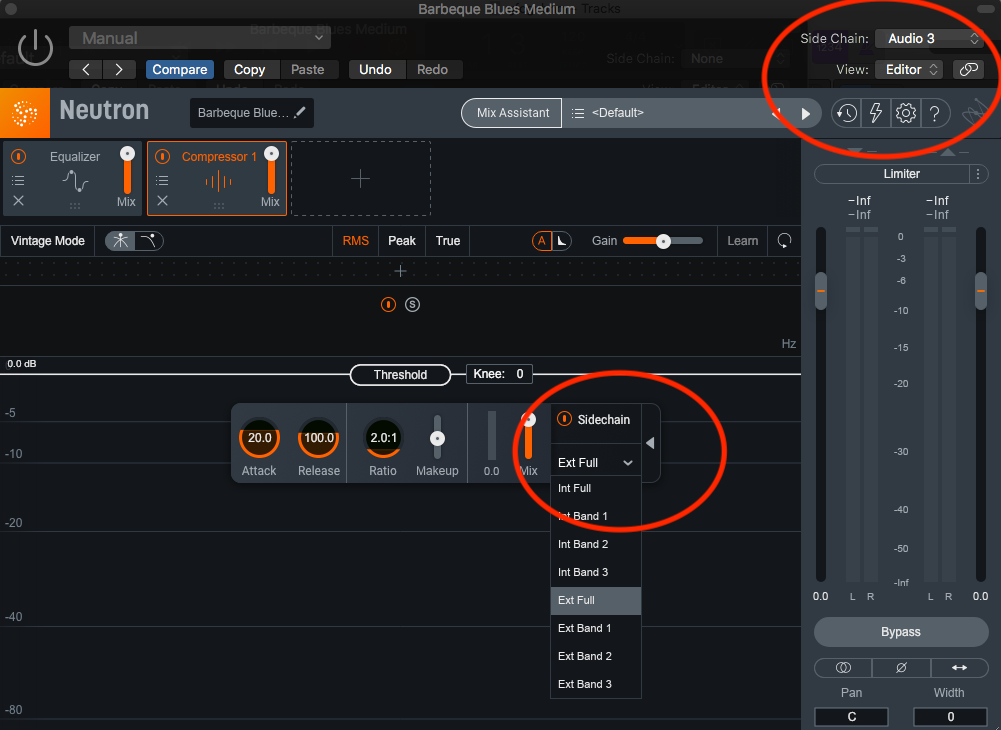 Neutron has a sidechain input, circled in the screenshot above.

An external sidechain input allows you to use any audio signal whatsoever to boss the compressor around.

Say you have a bass part and a kick drum. You want the kick drum to be audible, even when the bass is playing. Here an external sidechain input comes in handy. Simply follow these instructions:

The compressor is now good to go: it will compress when it detects the kick, not the bass. The bass will duck down whenever the kick hits.

That’s a typical use for a sidechain compressor. You can read about more creative uses here.

Typically, sidechains will only be found on dynamics processors such as compressors, gates, and dynamic EQs (though you may find exceptions). So, focus on threshold-based audio effects. To get started, here are some frequently-encountered situations that can benefit from sidechain processing.

For these next examples I can personally vouch for the sidechain compression used, as I mixed them.

The first is a song by Peach Face called “No Windows.” In this tune, multiple bass parts and synth layers at the end of the song are side-chained to the kick.

A more subtle example of sidechain compression in action can be found in the tune “Another Friday Night News Dump” by Leland Sundries.

Here, we have an example of multiband sidechain compression: the electric bass is again tied to the kick drum—but only in the low end and low-midrange. When the kick hits, these frequency bands duck for a moment, making a subtle pocket for the kick drum.

I also use a fair amount of sidechain compression in my podcast mixes.

In Salmon’s Run, Let Me Tell You About My Murder, Otzi: The Iceman Music Die, and True War Stories: Mission Report, I use multiband sidechain compression to help the voiceovers stand out over music beds.

When someone talks, again, a subtle pocket is created, and they are able to be heard. Using this process in multiband means you don’t hear so much obvious ducking.

Sidechain compression is a valuable process to learn. It’s one of the most frequently used techniques in modern mixing, but beyond that, it really lets you do great work. Whether you’re trying to do something innovative or just trying to fit various different instruments into a mix, sidechain compression can be a big help. It’s also something that’s tricky to understand, especially when it comes to internal sidechain filters versus external sidechain inputs.

Use sidechain compression in your music with a free trial of Music Production Suite Pro.

I hope this article demystified some of the processes for you. In the words of the great Biggie Smalls, if you don’t know, now you know!