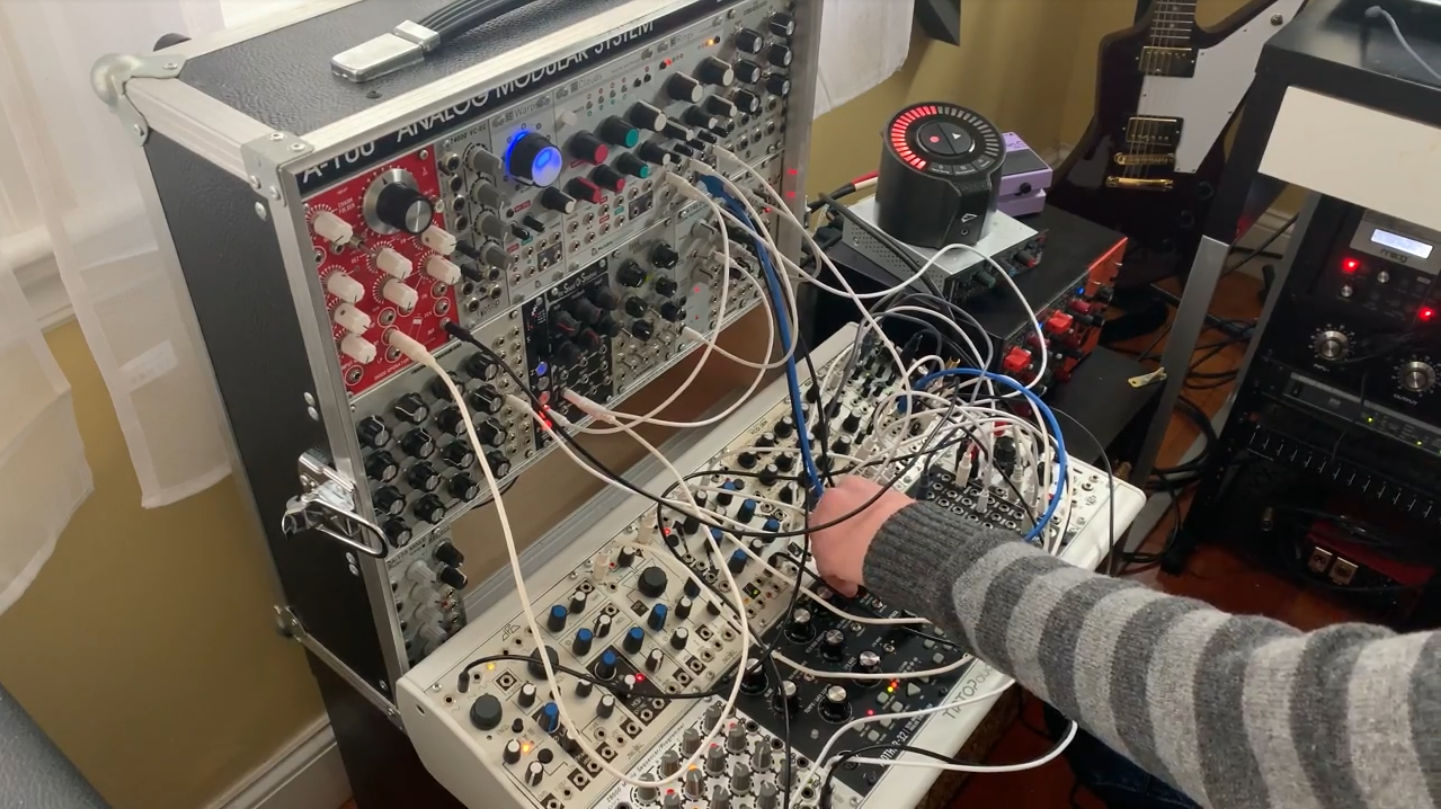 Music makers come in all shapes, sizes, timbres, and tones. Some of us are using acoustic instruments, some of us are using our voices, and some of us require several powerstrips to get the job done. One thing we all have in common is that we need to get what we’re hearing in our heads out into the world, one way or another.

In this piece, we’ll explore several ways of incorporating Spire Studio into the workflow of an electronic musician, taking a closer look at sampling, analog gear, and recording audio.

Is this thing for me?

As a person who likely uses a DAW to make music, like Logic or Ableton, stepping away from the computer might seem counter-intuitive. But the reality is that many of the people who are using electronics in their music are usually searching for a sound, and looking at a screen can often inhibit the process.

Stepping away from the computer is step one in the endeavor to start using your eyes less, and your ears more. When you don’t have the option to quickly scroll through digital presets on a multitude of VSTs, the process slows itself down and forces you take your time. No matter if you’re dialing in a sound, recording an acoustic sound source or just messing around, your environment matters. With a piece of tech like Spire Studio, you have the freedom to leave the laptop lid closed and your ears open.

Many people gravitate towards modular systems or analog gear because of the way it feels. In addition to sounding warmer, analog gear is tactile and requires the use of your hands in a way that a mouse or trackpad just doesn’t. In a lot of ways, it’s the difference between reading a paperback and a kindle. The words are there on the page in both cases, but one has a feel and smell that the other doesn’t.

You can take Sprie Studio with you anywhere and start a track completely separate from your DAW by capturing the audio output via Spire’s two inputs on the back. You could even set up two separate channels, and do an impromptu jam with two people and two pieces of gear. Time to bust out the LinnDrum, the OP-1, two pairs of headphones and invite your favorite gearhead over for a good time. Let us not forget our digital hardware friends as well, they can also get down with Spire Studio!

Here’s a 12-minute file of a mini jam session on a Moog Grandmother recorded via Spire Studio:

If you’re the type of person who invested in analog synths and samplers but all that outboard gear is just sitting there collecting dust, here’s your opportunity to unplug from the digital world and plug back into the analog one.

Really high-quality samples aren’t that hard to come by, but that also means that if they’re available on the digital marketplace, everyone has access to them. Some of the most compelling timbres and textures you hear these days are custom audio snapshots created by users themselves, which are then sampled, manipulated, used for granular or wavetable synthesis, so on and so forth. This is especially relevant on tracks by Diplo, Major Lazer, Skrillex and for anyone who’s a Serum or Wavetable user from Live 10.

Short of bringing the sound source into your studio to record, you have the option of bringing your computer + interface/mic setup around with you, or using another piece of gear. At that point, the variables really come down to:

Do you even have that stuff?

What is the quality of that stuff?

How well do you know how to use it?

Spire Studio takes all of those questions and answers them. You have a Spire Studio, which will record very high-quality audio with a very low barrier to entry. It’s portable and you can capture hi-fidelity audio whenever, wherever, bringing your sampling game to the next level. Close Voice Memos, and open Spire.

One thing many digital recordings lack is a sense of space. Since many of the sound sources electronic musicians are using are synthetic or manipulated, you lose that sense of something being played and recorded in a physical space or room. At that point, your only option for creating that space is through digital time-based effects processors. Although that will absolutely work, nothing will sound quite like the real thing.

Sometimes, vibe is everything. Oftentimes, vibe is everything! The most authentic and surefire way to create that vibe and sense of space is to do it in the real world. Do you want something to sound like it was recorded in church? Then why don’t you go record something in a church? Are you sick of pulling vocal samples off of Splice that sound overly processed and shiny? Why not record your own and stay in control of the timbre?

Spire Studio is a surefire way to capture your own high-fidelity sound sources like vocals, guitars, and percussion, which will instantly add a whole new vibe to the track, without having to take your entire home studio setup along with you.

When all is said and done, the only thing that matters when you’re making music, be it electronic or otherwise, is that you’re able to get in the zone and make it happen. For electronic musicians, that might mean taking a step away from your computer and reconnecting with the sounds themselves. Spire Studio can be a gateway to that connection, and perhaps one that you hadn’t considered before.