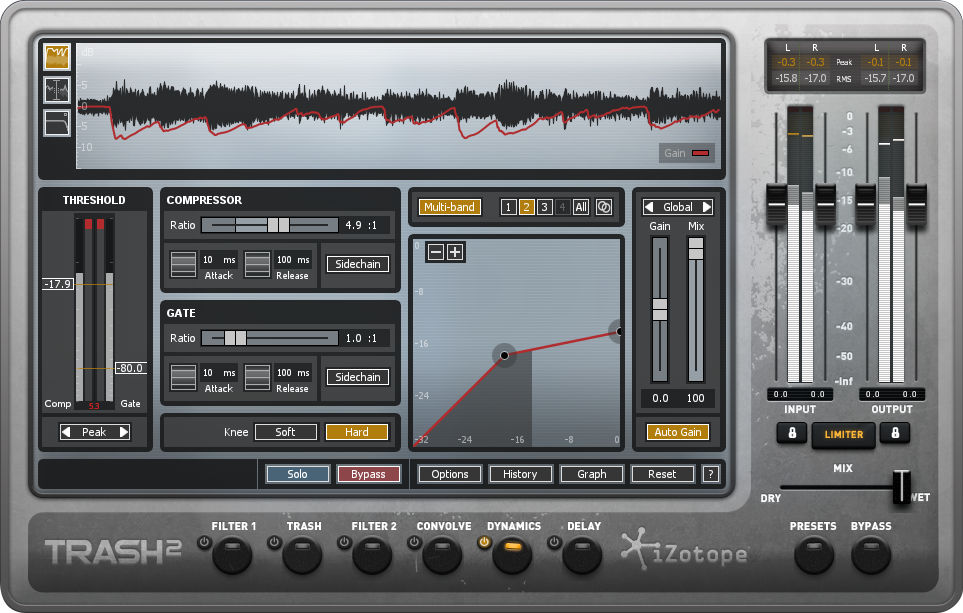 Originally considered a guitar-only effect, distortion has become an essential tool for producers operating in all genres, styles, and, tempos due to its ability to generate unique textures and tones.

In this article, we’ll help you get started with Trash 2, a powerful distortion engine equipped with a host of sound-shaping and modulation devices that combine analog aesthetics with digital possibilities.

To start, drag some audio into your DAW. Not sure what to use? Trash 2 has extensive distortion options that can be modified at multiple levels to suit all instruments.

At the bottom of Trash 2, there are six processing modules.

Select a module to edit by clicking the corresponding push button. A yellow light will show, confirming your selection. Turn the modules on and off using the power button to their left. The off setting doubles as a bypass when you want to quickly check how each module affects the signal chain. Bypassing and soloing is possible from inside each module’s navigation bar too.

The signal flow from module to module is modifiable, in parallel or series, via the Graph settings.

For the purpose of this article, our signal flow will follow the default settings (starting with Filter 1, ending with Delay).

Back to those bass sequences. We still need to trash them. Choose a preset as a jumping point or start from scratch, which is what we will do from the Trash module.

Exploring the waveshaper in Trash 2

With a distortion algorithm selected (we’re using “Tape Saturation”) under Stage 1, drag the yellow curve around the waveshape display to get an idea of how your moves affect the input. Stay subtle or destroy everything.

Put the Trash module in Multiband mode to access up to four frequency bands, which can each be processed with a different type of distortion. Right-click the multiband module to add bands, remove bands, and copy settings from one band to another.

We turned on all four frequency bands and applied a tweaked version of “Tape Saturation” to each one. Enhance or attenuate the added harmonics with the two band filter next to the Shape panel. We want to boost the high end.

With DAW automation you can record all the moves you make in Trash 2. As you record, play with Drive, Dry/Wet, filters controls, frequency band ranges, and more to capture lively, distorted sequences.

In the analog world, distortion is typically a combination of two or more effects. For example, a guitar will go through one round of distortion once it hits a distortion pedal, and again, in the preamp of an amplifier. We can replicate this “real-world” process in Trash 2 by adding a second distortion stage that interacts with the first one to create complex, but natural sounding processing.

I added a second stage to fuzz up the arpeggiator.

After a run through the Trash module, things can get a little wild and frequency taming may be required. Use the Filter 2 module like an EQ, with six fully moveable bands to cut and boost where needed. Filter 1 can be used to shape sound before being distorted.

The Convolve module uses acoustic impulse responses to simulate the characteristics of audio equipment, spaces, animals, and objects. Impulse responses are a common feature in reverb plug-ins, like those from Exponential Audio, that model presets based on cathedrals, halls, and other recording locations.

Ever wonder what a drum loop sounds like filtered through a cat’s meow? Or a vocal through an upright piano?

Convolve can be used post-distortion to filter sound based on the chosen impulse response. But it also works just as well as a transient shaper for one-shots, loops, and recordings, whether you plan to distort or not.

Below, you can hear a new bass sequence filtered through an impulse response based on an electronic toy.

And now through a pig. Because why not? I also turned the Delay module on for a dubby, cosmic effect. Configure delay speed (free or tempo-synced), feedback, Trash amount, stereo width, and the frequency range these settings will be applied to.

Convolve provides a quick way to produce unique sounds through filtering beyond the obvious and commonplace high-pass and low-pass. You can import custom impulse responses too, as long as the files are .WAV or. AIFF. Long recordings will be automatically trimmed by Trash 2.

The six independent modules in Trash 2 give you full control to design unique distortion effects that ooze texture. You can also employ each module as a standalone plug-in. For example, the Dynamics module as a multiband compressor in a mixing chain, Delay as an unpredictable analog tape delay, and Convolve as a unique sound morpher.

Whether you want to add a subtle layer of warmth, enhance guitar grit, or unleash sonic mayhem, Trash 2 is both straight-forward and capable.

Learn more about Trash and distortion