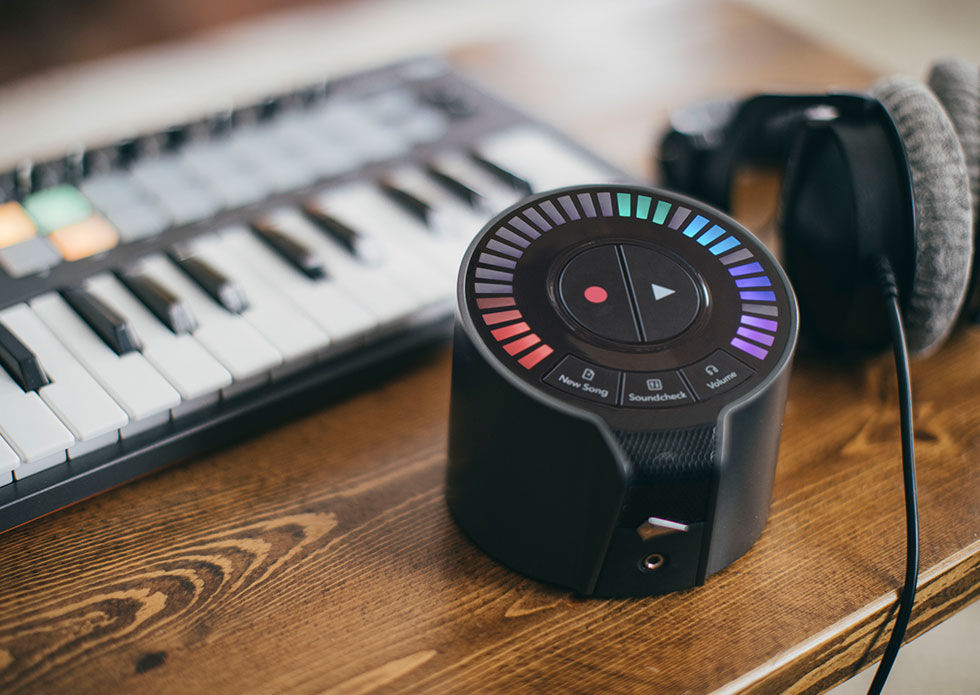 Sometimes songs with multiple instruments and parts can be overwhelming to record—especially when drums are involved. Luckily Spire Studio makes it easy to capture all these different parts and put them together into a cohesive mix without having to get technical or in the way of your creative flow.

Let’s check out a short tune with a few different parts that was recorded and mixed with Spire Studio, and then break down each part.

Drums can be one of the most challenging instruments to record—with so many sound sources and variables, it can be hard to get them right on the first go. Recording drums with Spire Studio’s built-in microphone is a great way to capture your kit without over-complicating things.

In this clip, a Spire Studio was placed on the rack tom facing the snare drum. This close proximity to the snare and kick drum captures a punchy sound and reduces the amount of room reverb captured. Of course, try experimenting to find what works for the sound you’re looking for!

Unlike drums, Bass can be one of the easiest instruments to record. In fact, many bass sounds that we hear in our favorite popular recordings were recorded without even an amp.

So for this clip, the bass guitar was plugged directly into Spire Studio’s instrument input, and without any recording effects.

Acoustic guitars are another example of where Spire Studio’s built-in mic shines. While acoustic guitars are usually straightforward to record, their sound can be affected significantly by the positioning of the microphone, so be sure to experiment.

For this clip, Spire Studio was placed roughly 8 inches in front of the 12th fret of the acoustic guitar. This close proximity helps keep the sound “dry” (with little room reverb).

While many times an amplifier is called for, Spire Studio also has some great-sounding amp simulators built-in. So rather than mic’ing up an amp with Spire Studio’s microphone, these guitars were plugged directly into Spire Studio’s instrument input, with Verb ‘65 amp simulator. This amp’s reverb and tremolo provide a nice mellow sound that compliments the acoustic guitars.

Sometimes a drum groove needs a little help, and a tambourine can be just the thing to turn to liven up your rhythm. These tambourines were recorded about a foot from Spire Studio’s built-in microphone.

The first tambourine in the clip above lays down 16th notes to drive the groove along.

The second tambourine in the clip above accents important snare hits. This tambourine utilized Spire Studio’s Deep Space Vibes reverb to give it some more space in the mix.

Putting it all together

Now that all the tracks have been recorded, it’s time to balance them together with Spire Studio’s Visual Mixer.

For this mix, each track was given its own space both in volume and panning. The drums and tambourines (all appearing as drum icons, with the drums themselves in blue) were placed center along with the bass to keep the groove as a foundation, while the acoustic and electric guitars were placed on the left and right sides to make the mix sound wide.

Pro tip: try toggling the mono/stereo button (on the left) for each track to see what you prefer. Stereo tracks can sound wide and larger than life, but sometimes too many of them can cause each track to lose its “place” in the mix, and lack clarity. For this mix, the center elements (drums, bass, tambourine) were left in stereo, while the outer elements were toggled to mono to free up some space.

Spire Studio makes laying down and mixing together a full arrangement an easy task. And between the built-in microphone, going direct, and even using external microphones, you have options to get the sounds you want.