It is not unusual for a lead vocal to be supported by two, three, or more vocal layers. This practice has existed for as long as pop music itself, and is done to add emotion, build intensity, and provide a booster shot to choruses and hooks.

Originally, vocal doubles were a product of natural retakes. But it didn’t take long for creative minds to reproduce the same double tracking effect with studio techniques instead. Today, digital processing offers a range of options—like Vocal Doubler or Nectar—for doubling vocals artificially.

The article will focus on two basic approaches to vocal doubles using a single take, applicable to all genres with a few tweaks. While live recorded doubles sound great, it's both difficult and time-consuming for a vocalist to belt out a song multiple times over with near-exact timing and intonation. So, with the right technology available, we lean less on vocalists and more on plug-ins to enhance and manipulate vocals instead.

Before diving in, it’s worth clarifying that this tutorial will focus on creative layering of note-for-note vocal performances, not multitrack harmonies or ad-libs. Here goes.

In the context of a song filled with sprawling synths and heavy-hitting drums, a single mono vocal can struggle to stand out. Vocal doubles that give listeners the impression of a stereo image are a reliable solution to this problem.

For this example, I’m working with the vocal below. To ensure clarity in your own songs, edit out the strange little noises picked up during recording before you apply vocal processing. Big picture, the performance and recording of the vocal here are solid—all I need to do smooth out some of the peaks with compression.

There is a common misconception that a vocal double can be achieved by layering two copies of the exact same recording in a DAW. The vocals will sound louder but they will still be in the mono field. To produce an authentic stereo image, there needs to be some time and pitch displacement between the original and double.

You can easily emulate these displacements on a single vocal track with the new, appropriately titled Vocal Doubler plug-in—now available for FREE download.

The vocal doubling or double tracking effect is adjusted by the separation and variation knobs. Separation widens the doubled signal for when you need an anthemic chorus vocal. Variation controls the level of human-like expression, making the doubled signal seem like a natural studio retake. Amount lets you blend it all together—like a wet signal on a reverb.

With a pair of headphones on, the vocal doubling effect here is quite obvious. Whereas the original mono take is heard from the centre of the head, the doubled version spreads out across the stereo field and is heard from both ears.

All vocal processing choices should be made with consideration for the instrumentation that supports it. It's easy to get hyper-focused on vocal production when the vocal track is on solo. But a pristine, sparkling vocal mix has little use if the song it is supposed to match takes a different direction.

Using the Vocal Assistant in Nectar Elements you can get a starting point for placing vocals in a mix. The plug-in analyzes vocals and applies a customizable preset combining compression, tonal EQ, reverb, and more in a matter of seconds. 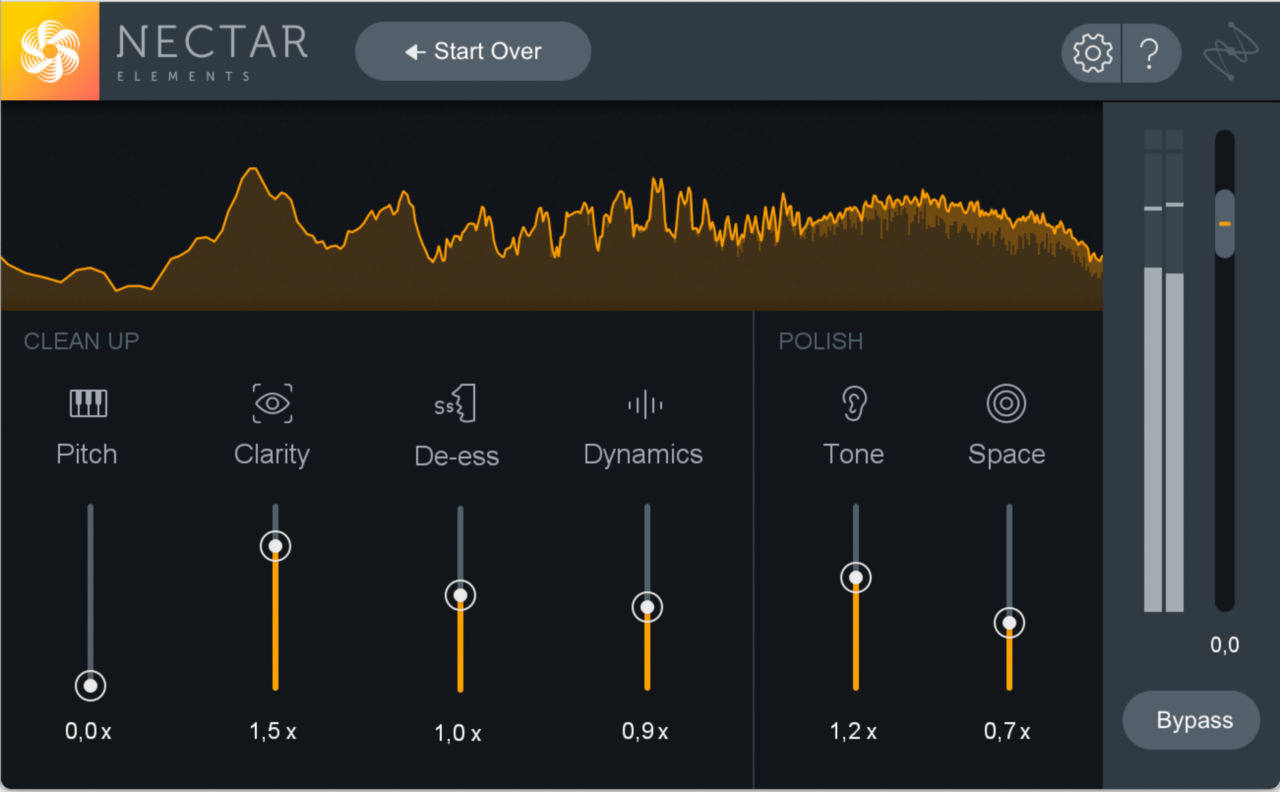 Here are the results—listen first with the vocal on solo, then in the context of a simple piano and percussion track.

Delay will give the vocal a wider sense of space. To ensure that delay tails don’t build up and blur vocal articulation, it's important to use a delay plug-in like DDLY that allows you to filter the output. Roll off some of the lows and highs to get a delay effect that doesn’t muddy the signal or overwhelm the high-end.

For the final mix of Vocal Doubler, Nectar Elements, and DDLY, listen below.

Whereas the first approach focused on creating a wide, modern vocal double, this one is all about texture, with a decidedly retro sound that references one of the first music groups to be known for their extensive use of vocal doubling—The Beatles. Here’s the original vocal I’m working with:

The final vocal is a composite of four vocal tracks: two from Vocal Doubler and two individual tracks weaved together. The double produced with Vocal Doubler sets the direction for the rough vocal aesthetic. 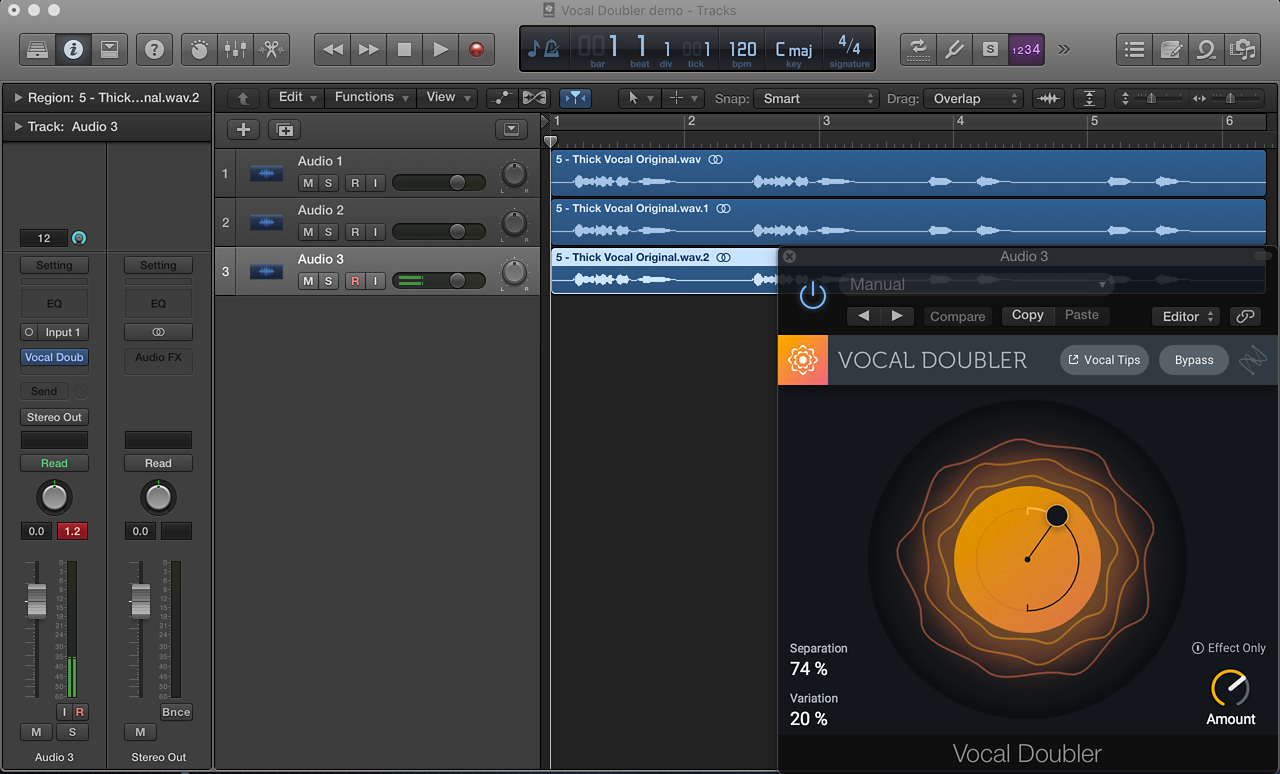 The final vocal is a composite of four vocal tracks: two from Vocal Doubler and two individual tracks weaved together. The double produced with Vocal Doubler sets the direction for the rough vocal aesthetic.

For a vintage tape sound, this double is run through the saturation module in Nectar. A tempo-synced 1/4 note delay (also from Nectar) is used to provide a sense of depth and enhance the rhythm of the instrumental.

On top of the double from Vocal Doubler are two stacked copies of the original vocal playing at slightly different times. As I mentioned earlier, simply layering two identical vocal tracks together doesn’t produce a true vocal double.

To introduce time displacement in a DAW, either manually shift the double forward or backward, or offset it with delay compensation. For instructions on the latter, check out your DAW guide: Ableton, Pro Tools, Logic Pro, Cubase. Take the double up or down several cents for pitch variation.

In the clip below, the first track is set to play 25 milliseconds early, and the second track is set to play 25 ms late, creating a difference of 50 ms between them. Under a delay of 30 ms, our brain perceives two identical audio signals as a single event. Beyond 30 ms, the second sound is perceived as an echo, which you can hear beginning to happen—this contributes to the psychedelic Beatles sound I am aiming for. The second track has subtle detuning too. In the clip below, the first four bars feature just one of the tracks, and the following four bars include both.

The purpose of this “manual” double is to add color to the vocal mix. They both have a generous amount of distortion and flanging from Nectar’s FX module and are low passed at 3 kHz to sound muffled as if they were played back from an old stereo system. And now, the entire mix:

As shown, vocal doubling is a fairly intuitive music production and mixing process. When tasked with doubling vocals there are two questions you should to ask yourself: what is the vibe or mood of the related song? And what does the vocal need to match it? This should guide the decisions you make regarding doubling and tripling and so on. In many cases, these decision will relate to either widening a vocal, adding a sense of space, or thickening it up with texture, all of which were briefly covered in this tutorial.