Music making tools to create beats and vocals in the distinctive style of T-Pain. 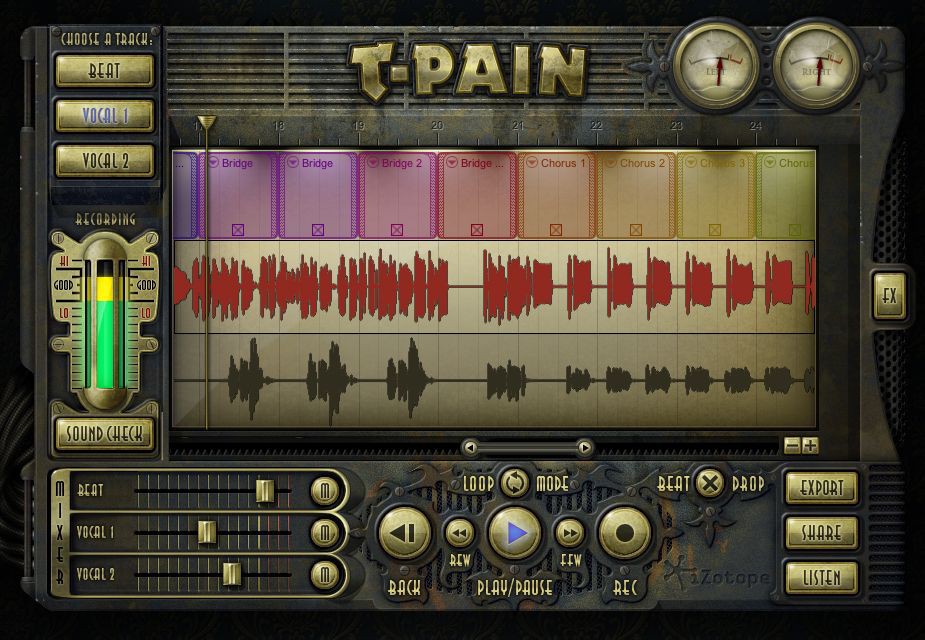 NOTE: The T-Pain Effect has been discontinued. Check out our latest vocal effects plug-in VocalSynth.

Cambridge, MA (July 20, 2011) — iZotope, a leader in digital audio signal processing, and T-Pain have teamed up on The T-Pain Effect, a collection of music making tools designed to empower everyone to make music. Users will be able to make beats and record vocals featuring the distinctive sound of T-Pain himself.

"When I teamed up with iZotope my goal was to bring people a quality audio tool that produces quality sound. iZotope's knowledge of audio technology really impressed me and I knew they were the right team to partner with. This is the technology I use on my own records. I wouldn't put my name on anything I didn't stand by, and you can hear it on my records."

The T-Pain Effect centers on The T-Pain Engine, a self-contained beat-making and vocal recording application for PC and Mac. Aspiring artists can get started immediately by selecting from over 50 professionally crafted song templates comprised of hundreds of T-Pain approved beats. With the backing track in place, users can then sing, rap, or speak on one or two vocal tracks to record a song with ease. Beats and song arrangements can be customized and vocals can be edited, including punch-in recording for retakes. For more vocal flavor, users can add The T-Pain Effect to the vocal tracks, tweaking the hardness and softness controls to dial in just the right sound. Then, after adjusting the levels of the final mix, the completed song can be exported and shared with friends or published directly to SoundCloud to share with the online world.

"We're very proud to partner with T-Pain to develop and evolve the world's first signature vocal effect," says Alex Westner, Director of Business Development at iZotope. "As an influential and tech-minded GRAMMY® Award-winning artist & producer, T-Pain has captured the attention of hip-hop, pop, dance and electronic musicians worldwide with his distinctive vocal style."

In addition to the standalone T-Pain Engine, the product includes a VST, AU, and RTAS plug-in version of The T-Pain Effect for use with popular digital audio workstations (DAWs) such as Pro Tools, GarageBand, Cubase, SONAR, Logic, and many more. The plug-in is a professional tool designed for music production studios and includes real-time monitoring through the host program, hardness/softness controls for dialing in the sound, and scale presets to match the key of a song. Advanced users can also create their own scale presets using the built-in keyboard or a MIDI controller.

The product also includes iDrum: T-Pain Edition, a virtual drum machine that includes hundreds of custom beats of different musical genres, inspired by over 50 new T-Pain iDrum kits with all-new samples. Used as a standalone application or a plug-in, users can arrange beats into songs, create new kits and patterns, import their own samples, and edit samples with effects like pitch, filter, and decay. iDrum T-Pain Edition is fully compatible with other content from iZotope’s various iDrum titles.

The T-Pain Effect is available for $99 MSRP. For complete product and ordering information, visit www.izotope.com.

GRAMMY® Award-winning and platinum selling artist T-Pain is an American singer, songwriter, rapper, record producer and actor. He began his career as a rapper in the group Nappy Headz. In 2005, on his debut album, _Rappa Turnt Sanga_, he began to sing, famously using the voice-modification feature now widely known as the "T-Pain Effect." Since the release of his debut album, T-Pain has produced and featured on over 45 top ten songs and 16 #1's. He has won many awards including two Grammy's and continues to expand his brand with fresh and exciting ideas like the innovative I Am T-Pain mobile app, which has now spawned the I Am T-Pain Mic and T-Pain Effect. T-Pain is now gearing up for the release of his new album, rEVOLVEr, this fall.

iZotope makes innovative products that inspire and enable people to be creative. Based in Cambridge, Massachusetts, iZotope has spent over a decade developing award-winning products and audio technologies for professionals and hobbyists alike. Used by millions of people in over 50 countries, iZotope products are a core component of GRAMMY-winning music studios, Oscar and Emmy-winning film and TV post production studios, and prominent radio studios, as well as basement and bedroom studios across the globe. Through a robust licensing program, iZotope also powers products made by industry partners such as Adobe, Avid, Microsoft, and Sony. iZotope was recently honored with an Emmy® Award for Outstanding Achievement in Engineering Development for its flagship audio repair suite, RX®.