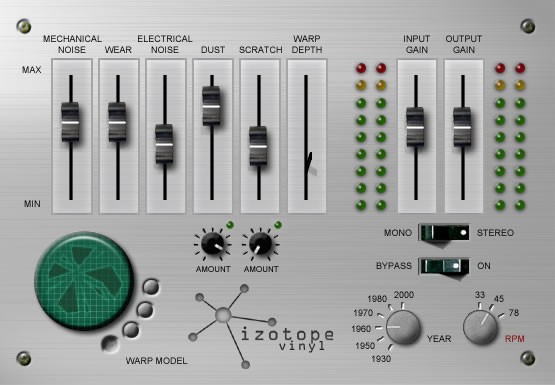 The ultimate lo-fi weapon, Vinyl uses 64 bit processing and advanced filtering, modeling and resampling to create authentic "vinyl" simulation, as if the audio was a record being played on a record player.

You have complete control over the following parameters:

To install this plug-in, you will need a passcode. You can get this for free by registering at:

iZotope makes innovative products that inspire and enable people to be creative. Based in Cambridge, Massachusetts, iZotope has spent over a decade developing award-winning products and audio technologies for professionals and hobbyists alike. Used by millions of people in over 50 countries, iZotope products are a core component of GRAMMY-winning music studios, Oscar and Emmy-winning film and TV post production studios, and prominent radio studios, as well as basement and bedroom studios across the globe. Through a robust licensing program, iZotope also powers products made by industry partners such as Adobe, Avid, Microsoft, and Sony. iZotope was recently honored with an Emmy® Award for Outstanding Achievement in Engineering Development for its flagship audio repair suite, RX®.